Okay, so December was kind of sucky for me, and the holidays were so hectic I could hardly breathe, and now that January is here and I'm back at work, it's time to get my ducks in a row. 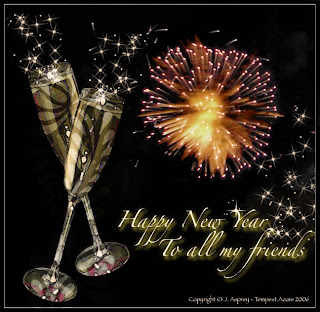 Happy New Year to everyone! Rob was here for ten days (longest visit we've ever had, previous record was nine when I ran away from home after my nephew's funeral, I think). It was awesome, but at the same time it kind of sucked because we didn't have five minutes alone together to relax. He arrived on December 23, and we then proceeded to spend 4 hours trying to get home (picking my car up at the garage, dropping it off downtown, and struggling to then get OUT of downtown, picking up the kids, dropping them at their dad's, etc.) Christmas Eve, we had dinner at my aunt Cécile's house (omg food!). This is a Christmas tradition spanning my lifetime - well, when I was little, we went to my grandma's, but that ended when my grandpa died, so we've been doing it this way as long as I can remember. I have GOT to learn to make some of the stuff that only she makes - she's in her 70s, and she's one of the most amazing cooks I've ever met :) I did finally approach her at New Year's brunch to ask her, and she said she'd be thrilled to teach me :D YAY! For Réveillon, we traditionally have turkey, but this year we skipped it (TOTALLY FINE, we're inundated with food anyway). She always does hors d'oeuvres in the livingroom, and then we had cold appetizers (her shrimp aspic is one of the things I want to learn), a hot entree (pâté du Lac St-Jean - another one of the things I want to learn) and dessert (raisin pie - YUM).

Christmas Day, we picked up the kids and trekked to my mom's so the kids could open presents, and we had Christmas dinner. OMG FOOD. Mom always makes "ragout de boulettes" which is a stew of pork meatballs and potatoes. Usually she does pork hocks too, but I hate those, so I didn't miss them much. We also had tourtière, of course, and more raisin pie (YUM). Generally, over Christmas, we only eat one meal a day LOL We can't handle more than that!

So we relaxed on the 26th (we actually ran around getting supplies for Rob to paint the bookshelf he's been building with the 12-year-old. The 10-year-old was away with her birth mom's family). On the 27th, I got a phone call from the store asking if I'd mind coming in to be the "yarn expert" for a few days. Stupid me, I said yes. Don't get me wrong, I love both my jobs, and I don't mind helping out, but if I'd said no, or at least not for the ENTIRE week, Rob and I would have had more time to hang out. I ended up working five hours the first day (27th) and then 8 hours every day after that. UGH.

On Friday, Rob's son flew into town to celebrate his dad's birthday (NYE). AWESOME. There were some hiccups with the flights, but we managed to sort it all out relatively painlessly :) That sort of thing is kind of normal when flying to/from Canada in winter.

Saturday, we went to my aunt Ginette's (OMG FOOD!!!!!!!!) for a New Year's Eve party. My poor uncle Robert had a bad reaction to the mussels my cousin had made as an appetizer (NO MORE FOR YOU!) and spent the rest of the evening miserable, but all in all, we had a good time and we ended up leaving around 3am (from ROCKLAND - ugh) - my aunt made Cinnabon Cheesecake... HOLY CRAP. It's a base of actual cinnabon buns covered in a few inches of cheesecake, with cinnabon icing on top. *DROOL* (there was also Tiramisu, which is freaking awesome). Got home around 4am, and fell into bed, exhausted LOL

On New Year's Day, we went to my aunt Nicky's place for brunch (OMG FOOOOOOOOOOD!!!!!!!!). My cousin and his wife always go over on NYE to help her cook - I've sometimes attended as well, but I'm glad I didn't pass up dinenr at Ginette's the night before (I totally pigged out too!) Nicky tends to try to cook a bit healthier on New Year's day, and thank goodness for that, because I could barely move by this point. She made these awesome little muffin-shaped omelettes (broccoli, smoked salmon, and a few others I never got to try LOL), bacon, sausages, fruit salad, and my grandma's cookies (BLISS). I got to bring home some leftover cookies - I love my grandma's cookies (des crottes - literally translates to "turds"). They are so good, and only my aunt has the "recipe" to make them - my grandma never wrote down amounts or instructions, just the ingredients list (you kind of have to reverse engineer the cookies yourself).

So as you may have figured out, French Canadians (at least my family) tend to focus mostly on food for family celebrations ;) Poor Rob, I thought he was going to go into shock. I swore I had to have gained at least 10 lbs in a week, but when I weighed myself after Rob went home, I hadn't gained ANYTHING. (SWEET!) I guess there's an advantage to having spent 40 hours at the store during the week :)

Now that the holidays are over, I'm trying to get my house in order, literally and figuratively. Rob helped me get about 80% of the laundry in the house done, so I'm trying to get to the other 20%, fill a few bags to give to goodwill, get my kitchen sorted so I can actually find stuff, and purge a little bit everywhere in the house (we have wayyyyy too much stuff for such a small apartment). The kids go back to swimming lessons tomorrow night, and I go back to school Monday night, so I've got to get things to a point where maintenance isn't overwhelming :) I'm also trying to break the 12 year old of the habit of leaving dirty dishes and bits of food in his bedroom (found half a pizza pop last weekend - gross) and break the 10-year-old of the habit of hiding all her dirty laundry in boxes in her closet (so that I can't find things to wash them).

This also means streamlining the food contents of my house. I got rid of most of my canned goods during the office food drive before Christmas, so now there's just the fridge and freezer to clear out. I don't need stuff I bought two or three years ago and never used. It's time to let that stuff go. I don't need five different kinds of cereal on top of my fridge if the kids only eat one. I also want to be able to have the time and energy for exercise, which I don't have when I'm overwhelmed. Yoga starts again next week (YAY) and I'm looking to be able to do some at home as well.

2012 will also officially be the year of knitting from stash. I tried to do that as much as possible last year, but I allowed myself a few binges here and there. I now have more yarn than I know what to do with, and my goal is to reduce my stash considerably, so that I can dedicate some of my storage space to other things. Another goal for this year is to learn some basic scrapbooking so that I can use up the supplies I bought a few years ago and get rid of all that.

So even though I don't believe in making New Year's resolutions, I am determined to get myself organized (who cares what the calendar says) and make my life a bit easier to maintain :) Here's to 2012 being even better than 2011 was!
Posted by Lynne at 3:28 PM