Of ships and shoes and sealing wax... 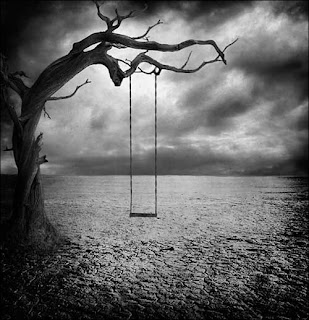 Today is a bit of a bittersweet day. A day that reminds me of my childhood, and that I'm growing older (middle-age - ugh) and that all things pass eventually. My nephew, Riley, would have been three years old today. He died from complications after a surgery to fix a deformed heart valve when he was nearly seven months old. And the pain and sadness is still as fresh today as it was the night we let him go. I try not to think about it too often (but fail miserably) because it's still such a crushing weight. My in-laws passed away a few years ago, and my grandmother died a couple of months before Riley did, so he's got a good group of people watching over him, but I'll always miss him. I hope they're taking good care of you, Riley bear.

And now I need to change the subject or I'm going to be a blubbering mess for the rest of the day.

So now on to more mundane things, I cast on a hat for Rob last night. I know, I know. I've got the blanket to finish yet, and the baby surprise jacket (and accompanying wee blanket), and the ten-stitch blanket, and the sampler blanket already on the needles. But Rob asked for a hat, and if you knew Rob, you'd know that's a pretty big deal. Rob simply does not wear "knitted stuff". This is the hat pattern I'm using, but not the same yarn (this is actually a hat I knitted for .. *ahem* the last guy I dated): 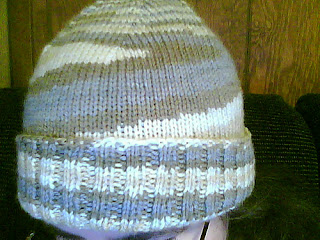 So Rob wants this hat to have a royal blue brim and the rest of the hat to be plain black. Oh lord... plain black stockinette stitch. The only royal blue I had was Red Heart Super Saver, and as the brim gets folded up on this hat, I figured that wouldn't matter (scratchy doesn't begin to describe Super Saver against your skin). The black, on the other hand... and this proves I love him. The black is Ella Rae Kamelsoft! Yeah, that's right. I love him, and there's proof! Trust me, Rob, right now all my knitting friends are going "oooooh! Kamelsoft!", so even though you have no idea why that's so special, you have to trust that it is.

The thing is, Super Saver is quite a bit thicker than Kamelsoft, even though they're both worsted - for new knitters, this is the bane of your existence. It's ALL WORSTED, but none of it is the same! So anyway, this means I've started knitting the black bit with the merino held double. (so he gets twice the kamelsoft! See how generous I am when the spirit moves me? Or when I have no other black yarn, and because I promised I wouldn't buy yarn this year, I have to use stash....? Let's go with the first one.) The fabric this is creating is, I swear, sturdier than Kevlar. And insanely difficult to knit. I had to put it down last night after my wrists and shoulders started using profane language to get my attention.

The blanket? It looks at me with resignation and despair every night when I sit down to work on the Baby Surprise Jacket, so I think I'll save that project for work, school and the kids' swimming lessons. The poor blanket, it's being neglected because I missed the first deadline, so now I figure I've got all the time in the world before Rob comes back for it on March 1st... and I'll be scrambling like a madwoman in a few weeks to finish it before that deadline too. Because that's just how I roll...
Posted by Lynne at 12:41 PM