I Okay, so the only vote I got was for a whack of photos all at once, so here goes: 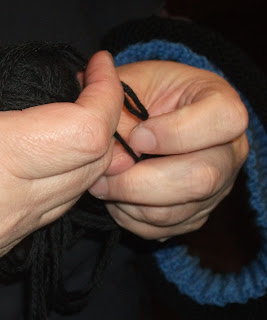 This was Kim untangling the black merino after my first ill-fated attempt at knitting Rob a hat. (you can see the brim of blue SuperSaver on her arm). I thought she was going to have a stroke watching me try to untangle it, so I handed it over like a good little girl LOL Good thing I have a fair bit of this yarn left, since my son wants a matching hat now. 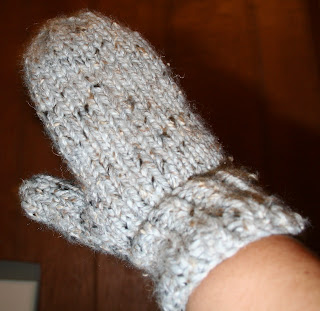 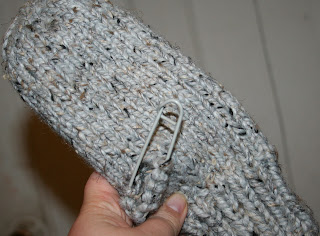 This is Kimery's (different Kim... too many Kims!) finished mitten. It fits so well, I want to knit a pair for me now!

(and this is it's still-thumbless mate. I am ashamed.) 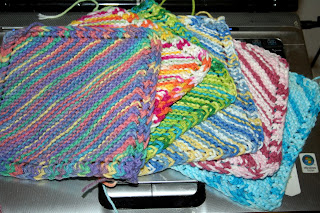 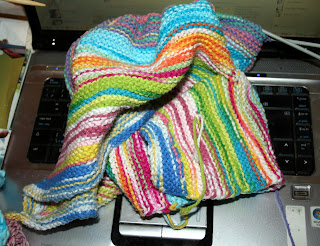 The top picture is the series of "dishcloths" I knit in order to use up some of the yarn for the Baby Surprise Jacket. The Jacket itself is the amorphous blob in the bottom picture. 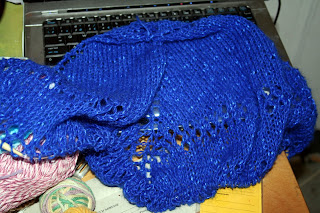 This is the blue pretty. I love it. I love it so much that I can't wait until it's finished so I can try  my hand at blocking (yikes!). 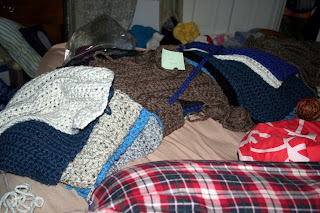 This *sigh*... this is what Rob's blanket looks like right now. A vast collection of squares and trailing ends. I have sewn in the ends on one series of the brown squares! Really! Um... honey? It might be finished for your 50th birthday..... Zachary and his cat wanted to pop in and say hi :)

So since I do have stats on this silly thing, and since the stats are puzzling me a bit, I have a challenge for all of you. I know that a couple of people read this blog regularly, but I don't know who you all are! I know Rob reads it (duh), but I'm not sure who all else is hanging around, and I'm curious :) Give a shout out in the comments to say hi! (yes, I'm shamelessly asking you to comment on my blog). Apparently one of the sites I get the most traffic from is Russian, which intrigues me to no end.

Spent the day on the "Beach" today (that's what Rob calls it when I stay on plan for the day). Mid-afternoon, I got ravenously hungry, and was craving carbs (any carbs) like nobody's business. Some cherry tomatoes and some spicy black bean dip took care of that! It's hard though. I've just had dinner, and I feel like I want nothing more than a piece of toast right now. Give me strength! (or a kick-ass metabolism... but I think it's too late for that one.)