What I accomplished this weekend....

I had plans to get all the dishes done, clear off the kitchen table, wash the kitchen floor, do some laundry, get a bag of stuff ready for goodwill (or whoever it is that has a convenient dropbox).... I had all these lofty ideals and great plans, and it was going to be great. And then this happened: 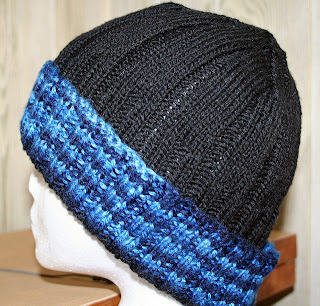 I knit Rob a hat. I had started a hat for him last Wednesday, but it wasn't working out. I didn't like the Red Heart Super Saver I had chosen for the "blue" (who would?), and holding the Ella Rae Merino doubled was just wrong. I wasn't exaggerating when I said it felt like Kevlar. My friend Kim thought the hat was so wrong in so many ways, she unravelled it at our Friday Knit Night :) (pic to follow).

So I switched patterns, switched blue yarns (this is some leftover Bernat Softee Chunky) and got knitting. I'm a slow knitter. I think it took me five hours of knitting on Saturday and two on Sunday to finish it, but I now have a finished hat sitting on the foam head in the corner of my bedroom. Rob wanted a hat, he now has a hat. He just has to come 850 miles or so to get it :) I may consent to mailing it... it's been brutally cold the last few days. Because, y'know, I love him and stuff. I had to resist every fiber of my being telling me to cast something else on once it was done.

Then I went to my parents' for dinner last night and left my iPad (which has my baby surprise jacket pattern on it) and my textbook - class is tonight. UGH. Which means no knitting on the coat of many colours, and I've got nothing else that's really portable. Time to cast something on?

In other news, I have GOT to start planning a bit better when it comes to food. I ended up making rice and chicken for the kids' lunches, and having a noodle bowl for mine. No breakfast planned, no snacks, and now it's 3:30 and I'm starving *sigh* So tonight at some point, I'll have to figure out what the kids are getting for lunch tomorrow since someone bearing a striking resemblance to my twelve-year-old left the bread open and now it's hard as rock. I also forgot to take the glucosamine I'm trying out all weekend, so no word yet on whether it actually helps or not. I promise to take it religiously this week!

Stay tuned, yoga starts back up again on Thursday!
Posted by Lynne at 3:39 PM