I got a bit tired of the lack of functionality here on Blogger/Blogspot, so I moved my blog over to Wordpress! You can now find Blue Ceramic Mug over here! Don't forget to update your bookmarks or RSS feeds!
Posted by Lynne at 1:13 PM 2 comments:

I was away in Chicago the last week and a half. It was lovely, but stressful. You see, I drove my own car (a 2006 Chevy Aveo) instead of the ex's larger, more comfortable car (2005 Toyota Corolla CE). I normally take his car on road trips because it's more comfortable for the kids, and we can fit more crap into it. But my car needed its brakes replaced, and car parts are WAY cheaper stateside, especially when you have a handy mechanically-inclined boyfriend who is willing to do labor for sexual favors ;)

We ordered the brakes. Then he took a peek under the car because it was making a weird grinding sound - which I told him about back in March! Said my struts were finished, and the sway-bar links didn't look too good either. So we trekked out to Autozone to get parts. He and his best friend got the struts and links replaced, but the grinding noise continued. The brakes never arrived, and when we checked online, it appeared that RockAuto.com never even registered the order I watched him place with my own two eyes. *sigh* So off to Autozone again for parts. Brake pads and rotors replaced, the wheel bearings seemed fine, but the grinding noise and extreme vibration continued. So... the car stayed in Chicago, and we came home :(  At this point, it's likely that something in the drive shaft is to blame, since it doesn't seem to be the wheels or suspension. That's a bit more complicated (and expensive) to fix. So I kind of feel like I'm left with this: 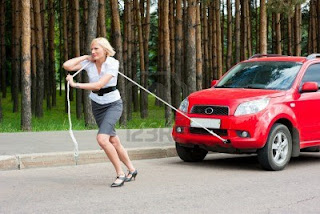 Poor Rob was so concerned that I'd have trouble at work (and to be fair, my boss scheduled what looked like a very important meeting for me on Monday afternoon) so he actually drove through the night on Sunday night to get me to work for the meeting - and to get Skye to her one-week CSI camp on time. He spent most of yesterday sleeping at my house while I was at work, and then last night he took off to drive back home. That's roughly 28 hours of driving in a 36-hour period. Two hours after he left last night, I discovered that the 401 through Toronto looked like this: 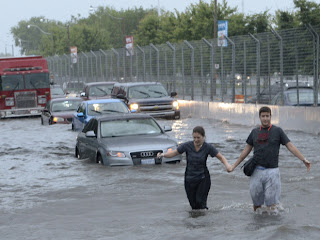 *ahem* slight freak-out there, since Rob was halfway between my house and THAT. I did finally manage to reach him and tell him to detour or turn back. He detoured onto the 407 and that was fine since it's a bit elevated and was somewhat removed from the extensive flooding going on in the GTA. Ask me if I managed to sleep a wink until he was safely out the other side of this though!

We did have some fun in Chicago though. I filled his freezer with most of the usual suspects. He got a batch of seafood pasta sauce (which I sadly ruined half of by forgetting to turn the stove off after serving it for dinner - this, kids, is why we don't cook while sedated); a batch of spaghetti sauce, probably my best ever; a batch of chili which was also pretty tasty; a lasagna (again, my best yet) and some matzo ball soup. I need to remember to adjust the amount of matzo meal if I use club soda instead of water, because half my matzo balls disintegrated into the soup, but it was pretty good nonetheless. We had matzo ball soup and lasagna for lunch the day Steve came to help Rob with the car :) The freezer is now well filled and I'm looking forward to my next visit being spent entirely outside of the kitchen!

We ate at Pizzaria Due (the original home of deep dish pizza!). We went to Illinois Beach State Park, which is a few miles from Rob's house: 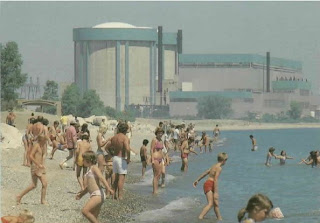 I don't mind telling you that the water was so damn cold that I only made it in about half-way up my calves and I couldn't feel my legs anymore. Skye actually got all the way in the water! Nuts. 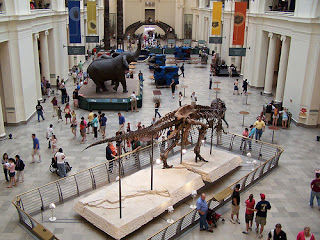 That would be the Field Museum of Natural History. It was a lot of fun. We only got to see about 1/4 of the museum, but it was well worth it, and we will go back to see more another time!

We were there for nine days, so what all else did we do? We worked on the car. ARGH. Next time I bring the kids, I'm going to work up a tentative schedule so we can get more fun stuff in and less hemming and hawing around the house trying to figure out what we're going to do that day ;)

So now that we've had all this fun and stress, I think it's time to relax a bit, regroup and slowly start getting things in order again. To get out of the rut of stressed, poorly planned travel, I'm going to start concentrating on getting to Maine :) I've mentioned the deal Rob made with me about going to Kennebunkport if I reach a certain weight. In the coming days and weeks, there will be further discussion of this. But for now, I will simply mention that it's 659km to the resort from my house ;) Stay tuned!

If you are so inclined, feel free to share a nightmare travel story in the comments! I have a few more I will probably type up in the near future. I VERY BRIEFLY met with a friend while in Chicago that I hadn't seen for a couple of years, and he reminded me of my very worst trip ever. :) Thanks, Steven!
Posted by Lynne at 10:38 AM 1 comment: