I woke up this morning headachy and miserable. Stomach was wonky, and I was (and am) having difficulty focusing on details (writing is all blurry, which makes it an official migraine, and not just a "lack of sleep headache"). I went to all the effort yesterday of frying up some lean beef and chicken breasts to combine with steamed vegetables for my lunches this week, and this morning boiled some eggs for breakfast (and steamed the vegetables)... but I was feeling so gross when I got to work that I ended up having a leftover slice of pizza and a chocolate bar for breakfast (soooo healthy). UGH. On the plus side, I do have the lean steak and steamed veggies for lunch :)

Three hours post-Tylenol, the headache and blurry vision is stubbornly hanging on, and the pizza is trying to decide if it wants to escape or not, and after listening to a very depressing (but lovely) Adele song, I feel like this: 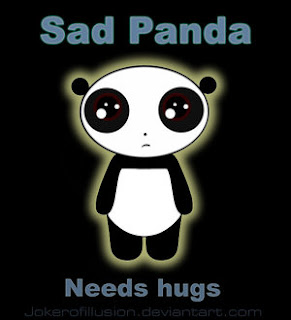 I emailed Rob whining for hugs, and he sent one, which is awesome. I officially have the bestest boyfriend ever - did I mention that he modified his original Swift design and made me another BETTER one for Christmas? Yeah, best boyfriend EVER. Pics and video of the new swift will follow at some point when I get off my lazy ass and get them off my camera (and find his video camera, wherever he left it in my apartment).

There has been knitting. My new prof, by the way, loves that I knit during his lectures :D YAY! I have been dilligently working on the Baby Surprise Jacket and matching "dishcloth" blanket I'm making for someone I've never met LOL Honestly, I've known this girl since she was about 16 (online, of course) but we've never met face to face. Over the years, I've watched her grow up, get married, and now she's become a mother. I couldn't NOT knit her baby something. (Now I feel guilty because one of my friends, whom I've known since college, has had not one, but TWO babies, for whom I've knit NOTHING... but that will be remedied shortly, Rakos, if you bother to read this - I has plans!) I also have to finish Rob's blanket, and I have plans for a pink poncho for Skye, a yellow/blue/brown one for me, and several baby and kid items for friends and family (and I have three charity blankets on the go, but they're "once in a while" knitting). Pics to follow.

I'm honestly shocked by how many people read this blog. I thought there were maybe two people reading this thing, and one of them has to because he sleeps with me. Turns out that people I've never heard of are reading and FOLLOWING. Neat :) (I've noticed that nobody comments though - c'mon people, throw me a bone here! I'm joking... mostly)

I've wrapped myself in my big grey shawl, which was the very first thing I selfishly knit for myself - and I love it! I am making myself a cup of rooibos and spiced plum tea, and I am contemplating my steak and steamed veggie lunch. And I suddenly feel a little bit better and a little bit happier. :)