Okay, so I have no idea what a Tenth Avenue Freeze-Out is (nor does anyone else who likes that song). But it was the only thing I could come up with to describe the absolute WHOPPING of snow we've gotten today. It's not as bad as the "24-inches-in-one-go" we had back in, what, 2009? But it's a lot of freaking snow. I wish I hadn't forgotten my camera, because this really is insane. I can hardly see the apartment buildings and hotel across the street from the office. It's big, fat, fluffy, Christmas snow, and it's showing NO signs of stopping (or even pausing to enjoy the scenery).

This is from the Parliament Hill webcam, just a few blocks from here: 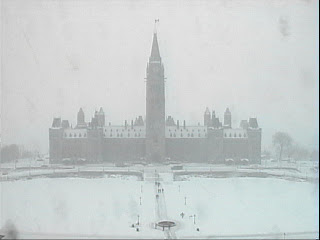 Notice how there seem to be greyish splotches all over the image, and it's faded, like it's a really old picture? Those grey splotches are snowflakes. And the "faded" quality? That's how much snow is falling between the cam on Queen street and the Parliament building 100 metres from it (ok, Americans... metres, I know. It hurts. Lemme see if I can dig this out of my memory banks: 109 yards, give or take. Yes, I cheated. I have an app for that.) It's snowing. A lot. Environment Canada has actually issued a "snowfall advisory". What, like living in Ottawa didn't already give us a clue that we'd get a lot of snow during the winter? In other news, I'm wearing the tank top I knitted for Christmas. Yes, it's the snowpocalypse, and I'm wearing a tanktop. But the girls at knit night have been waiting to see this thing since it was finished. So see it they shall. (it's KNIT NIGHT tonight! Yes, I'm going anyway!)

So I have discovered this other blog. This blog that my knitting friends have been talking about for ages. It's the Yarn Harlot! Yes, I'm a bit slow on the uptake. No, I'm not sorry I waited, because now I'm appreciating it so much more. And yes, you all told me so. Stephanie, please forgive me, I haven't commented on anything yet, because I'm too busy reading all the archives. I'm in January 2005 right now, so it might take a while for me to become current. Be patient. Suffice to say that I love you, Joe and your children as if you were all part of my own family, and I want to be you when I grow up. (which is weird, because we're around the same age, but there we are.) So go visit Stephanie, say hi for me, and maybe point her back my way (not that there's a lot of knitting content here... getting pics off my camera with my antiquated laptop is painful at the best of times, so I don't post a lot of pics). HI STEPHANIE!!!!

I've been working on Rob's hat (ouch). The progress is so slow, it's maddening. I can only knit on it for so long before my hands cramp up and refuse to grip the needles. This hat is made with merino and love and pain. Possibly not in equal amounts. I do so love the Ella Rae though, and I'm glad I've decided to make his had with it, because it's gorgeous stuff, and I've been holding on to these five tiny skeins of it since I first learned to knit. I've cast on another "dishcloth" for the Baby Surprise Jacket project. (If Chelsea ever figures out where my blog lives, I'll be in trouble, but I think I'm safe for now). Rob's blanket is still watching me accusingly from the edge of the desk, and Rob even made a hilarious comment last night that if I finished his blanket, I'd have something to keep me warm until he comes back to get it in March. Ha! He's so funny. He doesn't understand about my deadline-panic-induced euphoria. You get me though, don't you Stephanie?

This is one of those days I'm so grateful I park indoors during the day ;) 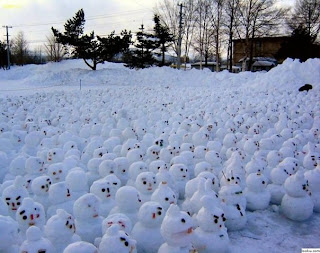