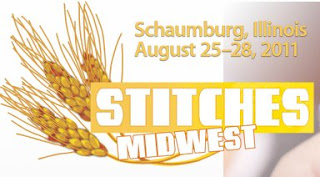 This past weekend, I attended STITCHES Midwest (http://www.knittinguniverse.com/STITCHES) in Schaumburg, IL (a suburb of Chicago). I hadn't the money to sign up for any classes, and I knew that if I got the chance to go shopping, I wouldn't be bringing too much home. In fact, when I arrived, I didn't have two pennies to rub together. *sigh* So the only thing I attended was the Marketplace.

But that alone was worth going! I got to see all kinds of neat stuff (like the Fix-A-Stitch and the Roxy Em Yarn Tower) that knitters create - Rob was fascinated with the motorized "tower" winder that the creators of the Yarn Tower had had made in order to wind their spools quickly and quietly. I got to visit designers I've always admired, like Helen Hamann - who is not only a great designer, but also a very nice lady who has a lovely, well-behaved dog :) I got to visit the owners of some pretty great shops (Sophie's Toes Magic Balls are particularly impressive - if you google it, you'll find her etsy shop, but it's currently empty).

I was a tad disappointed that Fiddlehead Yarns didn't have a presence (they're a LYS in Kenosha, WI that I've been dying to frequent for years now), and EXTREMELY disappointed that Ravelry didn't even have a table, or a handout or anything. But most of us were ravellers, and just about everyone I spoke to managed to work it into the conversation ;)

The classes going on all around us in little partitioned rooms looked fantastic. Next year, I plan to sign up for some of the "Market Sessions" (short, 1-hour classes that focus on a particular technique or difficulty). I might make my way up eventually to the half-day or full-day classes, but for now, I think this will ease me into the whole thing. I also would have like to attend the pyjama party, but a) I don't own pyjamas and b) we were dead tired and weren't going to drive back to the Ren at 10pm. Maybe next year if some of the girls want to come along :)

I did manage to get a LOT of work done on my DROPS tank top. I'm nearing the half-way mark. It's amazing what some three-hour layovers can do. The flight home nearly didn't happen, as every airport on the Eastern Seabord was shut down because of Hurricane Irene. If Rob hadn't said, "But what about Detroit?" when the ticket agent was trying to rebook my ticket, I'd still be in Chicago (not that I'd mind, but my kids start school tomorrow!) As it is, a few flights got redirected to Toronto just after my plane touched down because of high winds all around Ottawa.

A great weekend, definitely to be repeated :) Measurements and a "current progress" pic to follow tomorrow.
Posted by Lynne at 3:10 PM