The Drama Train Rolls On

Sorry for the lack of posts lately (I say to myself, since I'm the only one who reads this LOL). There has been a boatload of drama going on at my house.

First, my computer was in full mutiny, so I couldn't work my pizza shift on Saturday night. Then on Sunday, I arrived at my parents' house to find my father barely conscious and largely unresponsive, but my mother said he'd be fine, so I didn't think anything of it. There's more to it than that, but we won't go into it. I cooked a DELICIOUS batch of quinoa, which my mother took one bite of, went, "well, it's not my favorite" and left the rest on her plate. My brother, his wife, both kids and I (and their baby) DEVOURED our portions. It was FANTASTIC! Recipe below.

Went home with cranky-ass kids. My daughter has just turned ten, and seems to have taken this as permission to become a hormonal shrew. She bursts into tears for no reason, has massive tantrums (à la 2 year old) and has started snarking me on a regular basis.

My twelve-year-old has been a cranky-ass for at least a year now, but it's getting worse now. We've been trying to teach him that he can't speak to adults the way he speaks to his buddies on the playground. It's not sinking in. He has nothing but contempt for me, and it shows every time he opens his mouth. He starts junior high in two weeks. This should be interesting. Let's see how he reacts to being at the bottom of the food chain again ;)

Don't get me wrong, I love my kids. I wouldn't trade them for anything. (well, maybe some chocolate when they're behaving as above). They're pretty awesome most of the time. But then there are other times... like last night. My kids HATE going for groceries. We used to go while they were at karate class, but since they're no longer going to karate, they're home. Once or twice, we let them stay at Jeff's while we went shopping, but it's just easier and more convenient to bring them along. Yeah, right. As soon as we step into the store, the 10 year old decides she doesn't want to be there anymore. It's one tantrum after another, constant tears until we leave the store, and having to drag her along like a recalcitrant puppy. UGH. The other one just pokes at her and riles her up. They're so much fun to shop with.

Anyway, I'll just lightly touch on the drama bits, because I don't want to dwell, and more importantly, I don't want to get all pissed off again. Monday afternoon, I phoned my mother for something inane, and she tells me my father's in intensive care. Since 4:30 that morning. Um, WHAT???? When were you going to tell me this??? And she hasn't told my brother either, because "it's his first day back at work and I don't want to disturb him." WTF WOMAN????? I later found out that all the aunts and uncles already knew, as did most of my cousins LOL It was just the man's CHILDREN who didn't deserve to find out. Anyway, my brother and I visited him that afternoon, and while it's serious, it's not as bad as it sounded over the phone with half-assed information.

The second incident, I'm still pretty steamed about, and it happened at work, so I won't go into details. Suffice to say that if you're going to make someone stay late, it's not cool to pussyfoot around the subject and then waltz out the door at your usual time. Not cool at all.

That said, I've been making some awesome knitting progress the last few days, and I'm very happy with how the changing pad I'm crocheting is coming along as well! I will share pics when there's a bit more knitting to take pics of ;) 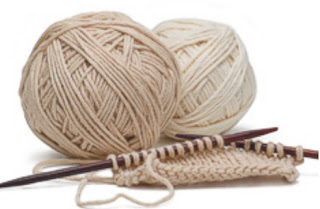 Bring the 2 cups water to a boil, add the soup base and stir. Then add the quinoa and simmer for 15 minutes. In a nonstick skillet, heat the oil. Toss in the onions, celery and carrots, Stir to coat; cover, and let sit for 5 minutes or until celery and carrots have softened. Add diced tomatoes and sauce. Cook another 30 seconds to 1 minute to coat everything with sauce. I add a dash of steak spice, but you don't have to :) Stir the vegetables into the cooked quinoa and mix in the grated cheese. Serves 6-8 as a side dish.

Email ThisBlogThis!Share to TwitterShare to FacebookShare to Pinterest
Labels: drama