For the last few days, I've been e-mailing back and forth with a woman who was my closest, best, most adored friend in high school. We drifted apart, as many friends do, when I dropped out of school and moved away. She started dating someone who wasn't overly fond of me, so calls and visits became less frequent until we lost track of each other. A couple of years ago, I found her on Facebook. I sent her a friend request. She didn't respond. A year later, she added me. I sent her messages and posted on her wall. She never replied. I thought she just added me as an afterthought and didn't really want to talk to me anymore.

Then, two days ago, she sent me a message out of the blue saying basically that she hates facebook, she never logs on, here's my e-mail. I immediately e-mailed her back, and today, THIS VERY AFTERNOON, we are going to meet at a coffee shop as soon as I'm off work :D I am so excited to see her, I can't concentrate on ANYTHING. I had trouble sleeping last night. I can not WAIT for 3:45 to get here so I can bugger off and find this coffee shop!

I have so many memories of her, and we had so much fun together :) It was one of those opposites-attract things. She was very quiet, withdrawn and proper, and I was kind of wild and chaotic. We both had stuff going on at home, and had some things to work through, but we were always there for each other, and for a year or two, we spent almost all our time together. She was the one person who saw my home life for what it was. Then she moved to France with her family. I was bummed, but I knew she'd be back in a year... when she got back, it just wasn't the same. Her parents were breaking up (and I was wishing mine would) and her brothers had become teenagers, and I had discovered boys. We still talked a lot, hung out every so often, but things had changed.

Last night when I talked to her on the phone, it was like we were sixteen again. No time had passed, she was the same girl I remembered, and she said I was as well. Of all the people who have come and gone in my life, I mourned losing her for years. I never really got over it. I always wanted to find her again and make it right (not that it ever went wrong, as I said, we just drifted apart). She was the one friend I've always missed having around when important things were going on in my life. When I got married, I was so sad I didn't know how to contact her to invite her. When Zachary was born, I was sad I couldn't share that with her. When I got separated, I missed having her shoulder to cry on.

It's been fifteen years, Sylvie, but I never stopped missing you or hoping I'd see you again one day. I'm so happy that I'll get to see you later today - I don't think I was this excited the day I got married! 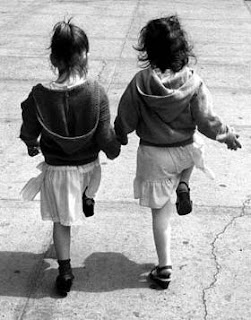 Photo borrowed from here.
Posted by Lynne at 1:35 PM