Progress on what? Well...on life in general, I suppose.

Contractor's still a bit of a jerk, but he's doing a good job and I'm not the one paying him, so meh. I have to admit, it's annoying to come home to a new and interesting mess every night, plaster on the bottom of the toilet seat (you'd think he'd wipe his hands before touching himself there, wouldn't you?), having to empty different portions of my house into others - last night, it was the cupboards on only one side of the kitchen. Thank goodness only one side, but the awesome news is - I'm getting a range hood! :D YEAH!!!! I've been moaning about the lack of one since I moved in! My back room is completely drywalled and patched, and he's starting work in the bathroom.

Cooking - I was a bit lazy last night. Skye had begged for a pasta salad from the deli, so Zachary and I were left to our own devices. We decided to go with shrimp with salsa and balsamic fig sauce. You wouldn't think those three things would go together, but OMG it was amazing. I then used the cooking liquid (leftover salsa and fig sauce) to make the most awesome stuff ever. I had a few small carrots going wrinkly on the counter, so I sliced those thinly, then tossed in a quartered and sliced onion, and then a pile of sliced portobellos I'd gotten for half-price at the grocery store. Only one tiny piece of mushroom was slimy, so I got an awesome deal there! I cooked that up until everything was soft and wonderful. Then I made a small pot of couscous with cottage cheese in it (TRY it, it's SO GOOD). I packed myself lunches for the rest of the week with a scoop of couscous and a load of veggie stuff on top. AAAAAAND then I promptly forgot my lunch on the kitchen counter this morning *sigh*

Instead, I went to the Table for lunch. Braised onions (my fave), roasted tofu with broccoli and cauliflower, braised red cabbage, and some awesome squash dish. I have now researched a recipe for braised onions and will be trying it this weekend *drool* This was also nearly half a mile from the office, so I got a good walk in before eating :)

Although this is a short week, it seems like the longest ever. A good deal of that is because Rob left at lunchtime on Monday, and time has been dragging since then. We've been doing the long distance thing for a while now, and it sucks more now than ever. The fact that we've never spent as much time together as we have this summer, in my mind, just shows how much better things would be if the distance didn't exist. I keep joking that he'll just have to marry me so we don't have to do this anymore (I have to admit, I love that it freaks him out a bit).

I'm about half-way through the heel flap on these never-ending socks - okay, I know I'm making progress, and I'm not working on them all that much, but I'm not used to working with such fine yarn, and it's frustrating. This is why I knit and crochet BULKY stuff. LOL But they're so pretty! (sorry, no pics yet). I do have a picture of the hat I finished on Monday. I decided I wanted something small that would end quickly, since the kitchen curtain and socks are taking forever (let's not even mention Color Affection, okay?). So I knit up a Hurricane Hat in some Gedifra Airmix (discontinued) that I had lying around. This stuff is so soft, I bought all of it I could find when Knit Knackers was getting rid of it years ago. I had one skein of blue and six or seven skeins in different shades of pink. This is going to go into the pile for our fall charity knit-along in the Ottawa Area Ravellers group. 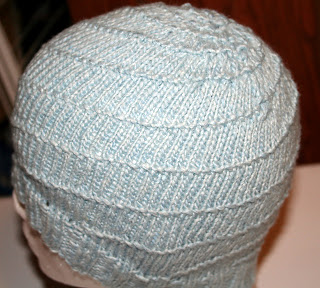 Oh, and worry not. I know the hat looks huge, but it really isn't. My foam head is just freakishly small *sigh* When I took Stephanie's Grok the Sock class, she taught us that the length of your hand from the base of the palm to the end of the middle finger is the length a hat needs to be before the decreases start, so I went with that. It fits me perfectly. I do, admittedly, have a big head, but bigger is better where hats are concerned. You want it to cover your ears... and you can always roll the brim up if it's too long. If it's too short, nothing can save it.

Tonight I'll be spending time reorganizing things around the house so we can find stuff during "the ordeal" and doing laundry, because... three people (including one clothes horse) = lots of laundry. Tomorrow is knit night, and I can't wait! :D If I can get my kitchen back into some semblance of order, then this weekend might see me making jam! I have a lovely cantaloupe I plan to make Marisa's Cantaloupe Vanilla jam with, and I'd like to make another batch of my now-infamous Peach-Ginger jam. My mom's cousins from Florida love this stuff so much, they ate an entire jar when they visited! Secret is to use super-fresh ginger and to add it with the pectin so it stays spicy :) Cheers!
Posted by Lynne at 2:35 PM