Preparing for the Zombie Apocalypse...

This weekend, I had no plans whatsoever. None. I was a girl without a plan (errr... clue). So of course, I decided to can ALL THE THINGS!!!!! Seriously dudes, I produced so much canning this weekend that the zombies can come at me any time they want. I'm ready.

I started out with something I've been *talking* about making for weeks, if not months. That's right, Marissa McLellan's Cantaloupe Vanilla Jam from the Food in Jars cookbook! This jam... it's complex and yet simple at the same time. I need to watch a few more tutorials on how to scrape vanilla beans though, because those suckers are NOT easy to work with. Maybe I just need a better knife. Anyway, after much frustration and cursing at the vanilla beans, I ended up with this: 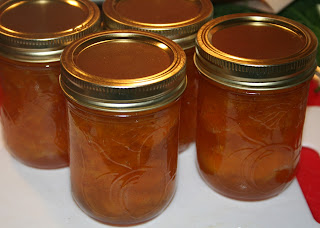 Every year for New Year's Day, my aunt Nicky invites the entire family over for brunch. And every year, it is tradition that a basket of croissants and a variety of "different" jams be placed on the table. This year, this is going to be one of those jams. I was supposed to pickle a whole bunch of carrots, so I got everything ready, had the pickling spice in my freshly-sterilized jars and was ready to just put the carrots in when I opened the bag and... all my carrots were covered with black rot. Boo! But I had gotten some asparagus for an excellent price earlier in the day, so pickled carrots became pickled asparagus! 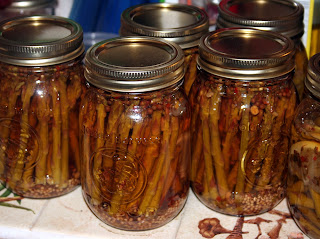 Five pints of this lovely stuff now grace my pantry - the sixth went to live at Kari's house. I can hardly wait the two weeks you're supposed to let these sit. I love asparagus, I love pickled asparagus, and this is MINE. This is kind of a combination between Marissa's Pickled Asparagus recipe and Williams-Sonoma's Crunchy Pickled Carrots recipe. There's lemon, there's dill, there's pickling spice, but I didn't have any cider vinegar, so I made it with plain old white. I had prepared seven jars though, because my new canning pot (with a RACK!) holds seven and the recipe was supposed to make nine. So I had this pickling spice sitting around in a jar... I couldn't just toss it. 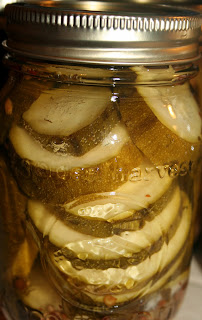 BAM! One lonely little jar of zucchini pickles! I had a zucchini in the fridge, so I sliced it super thick, made up a bit more pickling brine, and off I went. So now I have eleven jars sitting on my counter, and I know I have this huge bag of yellow plums in my fridge that won't last forever, so.... Marissa to the rescue again. I used her Spiced Plum Jam recipe (from the cookbook again) and ended up with this: 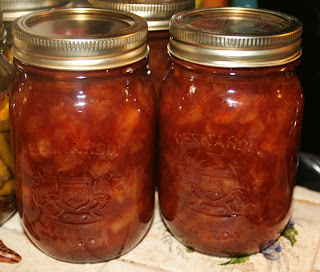 Three pints of pure heaven! I didn't get quite four pints out of it, but I got three and a bit, and Kari says it tastes fantastic (she got the "and a bit" and apparently had it for breakfast this morning. I was concerned that it would be too tart because the plums were REALLY firm, but she said it was just the perfect balance of tart, sweet and spicy. YAY!

So this morning, I was in the shower when I suddenly decided that I really needed to do something with the huge bag of onions I got on the half price rack at the grocery store before they met the same fate as the carrots (which weren't half price!). I waffled between making onion chutney, onion relish, and finally decided to just bloody pickle them! Now I've made pickled onions in the past, but never with full-sized onions. I'd only used pearl ones before. In addition, I didn't have a recipe. I was just flying by the seat of my pants. Turns out, I'm pretty good at flying by the seat of my pants, so I present to you...

Sterilize your jars by submerging them in water, and bringing the pot to a boil. Boil for ten minutes, then remove from heat (but do not remove jars from water). Place the lids (the little flat part only) in a small pan of water and simmer.

Chop your onions and set aside. 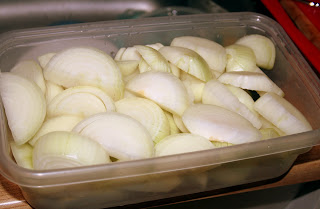 In a large pot, combine the vinegars and water. Add the salt and sugar, and bring the liquid to a boil. Once the liquid has boiled, remove your pots from the water they've been resting in. Add 1 Tbsp pickling spices and one sprig of dill to each jar. Pack each jar with onion slices until you reach the narrow neck. 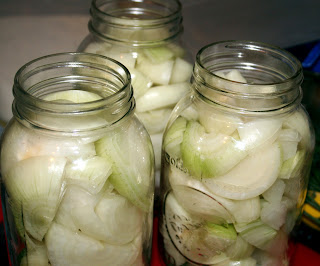 Ladle the hot vinegar mixture into the jars, leaving 1/2 inch of headspace. Place the lids on the jars, tightening the band just until it resists (i.e. fingertip tight). Once all the jars are filled, put them back in the hot water (you may have to bail some out to prevent overflow) and return to a boil. Once a rolling boil has been reached, process the jars for 20 minutes.

Remove jars from heat and set aside to cool. Let jars rest for 3-4 weeks to fully develop flavours. Enjoy! 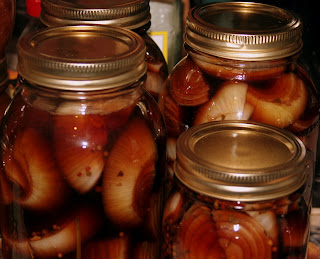 ©2012 Lynne Toll at http://blueceramicmug.blogspot.ca
Posted by Lynne at 1:38 PM