My upstairs neighbour plays guitar. This normally doesn't bother me, even when he plays late at night. Today, however, he's been trying to teach himself Savage Garden's Truly, Madly, Deeply. This means he's playing the song over and over again trying to get certain bits right. So far, I have counted FORTY-SEVEN repetitions of the damn song. Now I like Savage Garden as much as the next girl, but COME ON!!!!!

In other news, I woke up to a lovely thunderstorm this morning. I don't think there's anything in the world quite like waking up to pattering rain and rolling thunder in your storm-darkened bedroom, knowing that there's nothing at all you need to leave the bed for. I did eventually get up, but it was such a nice feeling. Last week, I called my boss at the store and quit my job :) Best. Feeling. EVER!!!!! So now my weekends are my own and I'm enjoying the new-found freedom.

Anyway, after I dragged my sorry butt out of bed, I sat at my desk and got frustrated at all the semi-balls of yarn lying around that I've used for various projects. I decided to do something about it, picked up two leftover bits of Lion Brand Homespun and... cast on another hat. *sigh* At least our fall charity drive will get a pile of stuff this year! I thought I had at most 30 yards of the beige, so it would do the brim and a few single row stripes before I switched all the way over to the red. Um.... so much for that. There was a LOT more beige left over, but at least now it's all gone. Only problem? I have enough red for a whole new hat. DAMMIT. But it's pretty.... lookit: 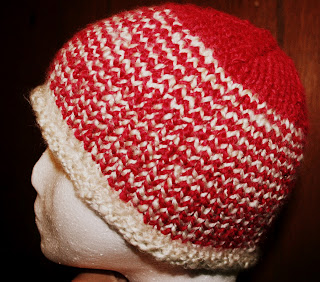 Incidentally, call me a yarn snob, but I hate this stuff. I hate working with boucle, and this is no exception. I only bought it because the yarn selection at the Walmart in Zion is woefully inadequate and it was the only "bulky" yarn they had. I knit some props for my sister-in-law because her photographer didn't have any infant props.

I also cast on a new project on Friday... I'm knitting Jenna Adorno's Tempting (from Knitty.com). I liked this top the moment I first saw it, and it was one of the first items added to my Ravelry queue. I'm finally attempting it. Kari's determination to finish her sweater and shawl for Rhinebeck kind of inspired me to do something insane, so I'm going to try to finish it for Rhinebeck. Oh, did I tell you? We're going to Rhinebeck :D Sue, Kari, Sarah and I are all going to pile into Sue's Jeep (I think it's a Compass) and head down Friday, October 19th after work, stay in Albany and come home on Sunday evening. I'm really looking forward to it, although I don't plan on doing nearly as much shopping as they are LOL Also bought my ticket to go to Rob's for US Thanksgiving. YAY Porter seat sales!

I'm off to knit and watch movies!
Posted by Lynne at 7:28 PM