A Different Way to Preserve, and Actual Knitting Content!

I had a brainstorm the other day. Doesn't happen often that I'm struck with a genius idea out of the blue, but I was on Sunday. My grocery store sometimes has some decent finds on the "half-price produce" rack, and other times, it's either all junk or there's no rack at all. On Sunday, however, I hit the jackpot. Pint after pint of gorgeous grape tomatoes (those super-sweet little oval cherry ones). Ten pints. Normal price is $2.99 a pint. I paid a buck a piece for them. And the worst I came across was maybe a little mold on one or two per pint. All in all, a total steal! But what was I going to do with ten pints of cherry tomatoes? Never fear, I had a plan :) 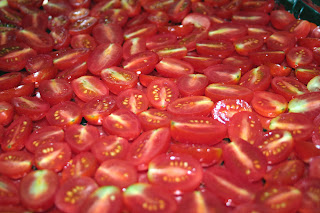 They were so juicy and so pretty, I couldn't resist. And when you find out what I did with them, you may set aside a plant or two next year for just this purpose. 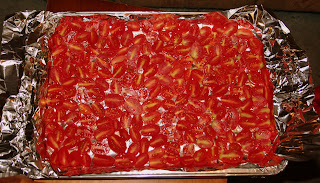 It's okay to pack the baking sheet this tightly, because as they dry, they'll pull away from each other. That's right, I set my oven to 200F and tossed the sheet in there overnight (it was more like five sheets... this was the last batch). The next morning, I had this: 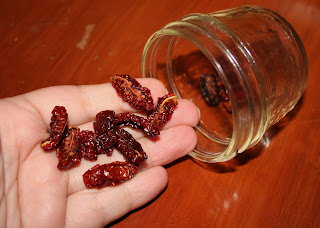 Imagine if someone decided to make a tomato candy. A complex, rich, sweet, smoky candy that just brought back your happiest summer afternoons when a bonfire in the evening was just starting to sound like a good idea. Now imagine if that candy was not only delicious, but also had no sugar added, and was good for you! These crunchy/chewy little morsels are hard to pack away, because you just want to keep popping them in your mouth. I now have a quart jar full of dried ones, and once the last batch comes out of the oven tomorrow, I'll have a couple of four ounce jars of them packed in olive oil. SO GOOD. You can either eat these dry, or you can rehydrate them in soups, sauces, casseroles... I'd like to add some to turkey sausages for a more complex flavour.

Now, onto the knitting.... I have actually been working on knitting, I promise! :) Here's a hat I cast on Saturday afternoon during can-a-palooza! 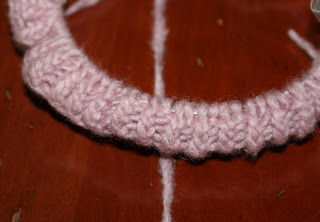 Knit out of Gedifra Airmix (discontinued) that I got at Knit Knackers very shortly after I first learned to knit, this is the Bankhead Hat by Susie Gourlay. This stuff is a dream to knit with. It's wool and cotton mixed, it's fluffy, it's soft, and it's warm! For some reason, when this time of year rolls around, I get a hat fixation and I have to knit a half-dozen of them before I'm satisfied. Which is odd, because I don't wear hats. What I really need is some fingerless mittens, because my forearms and hands get really cold. Like right now.... the rest of me is perfectly warm, but my arms and wrists are frozen. 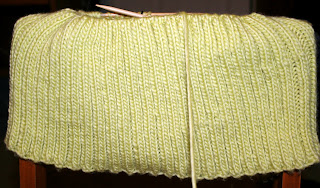 So, of course, I'm knitting a sleeveless, off-the-shoulder sweater. UGH. It's pretty though :) I love the chartreuse shade I picked. The top is Tempting by Jenna Adorno, knit out of Jill Eaton's Minnow Merino in Celery and it's available on Knitty. Another thick, poofy, soft cloud of a yarn. Although this one fluffs something awful, and it tends to untwist itself slightly. Also, don't use invisible joins with this stuff. I had two come apart before I clued in (had to duplicate-stitch those back up). It's pretty, but not terribly practical... 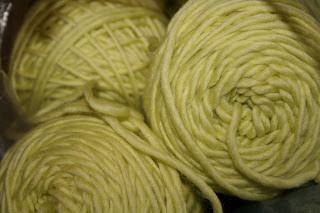 But OH SO PRETTY!!!! And soft! I'm loving it :) I've also made a bit of progress with Rob's kitchen curtain. I'm on the last pattern repeat before the top garter stitch. I'm debating whether to have eyelets for the curtain rod to snake through or having a fold-over tab to slide it through. Decisions, decisions.... 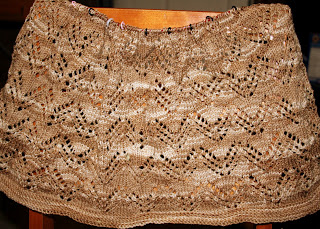 I should probably point out that this is only the bottom panel. As they're café-style curtains, there's a small upper panel as well, but he really just wants the bottom one. This is knit out of Estelle Cadenza which was given to me by a friend who was destashing it a few years ago. It's tried to be a few things since then, but this is what it really wanted to be. Cadenza is a (sadly) discontinued yarn made from merino and silk and it's lovely to knit with. Please excuse my mismatched stitch markers. The only way I can knit lace and retain my sanity is to have a stitch marker every pattern repeat. The pattern in this case is this one from Knitting on the Net's online stitch dictionary. I adapted the bottom, side and top borders, but it's basically just miles of Triple Chevron lace :)

And that's what I've been up to lately. The Riverbed socks have been entirely ripped back and will be started again when I can face the idea of knitting socks for someone else, since I know they'll never fit me. The plain vanilla socks will be picked up again the first time my feet get cold, I'm sure! Rhinebeck is only three and a half weeks away!!!!!
Posted by Lynne at 9:55 PM