Nobody said it was easy....

This morning, Rob rallied the troops and had the kids wake me up with hand-drawn birthday cards. This is Zachary's: 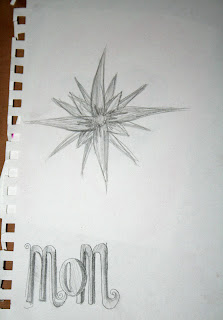 It's simple and careful and so totally him :) He's always most comfortable working in monochrome, and although he sometimes experiments with micron pens and colours, this is his innate style and it's one of the things I love most about him. 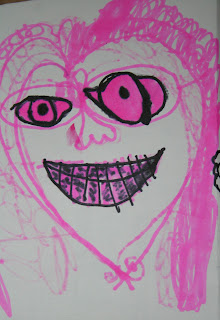 I'm.... err.... a bit disturbed by this one. In fact, I think this particular portrait of me will figure heavily in nightmares for the next little while LOL I'm not sure who thought it was wise to hand a destructive eleven-year-old a set of coloured sharpies, but.. um.... I think maybe I'll encourage her art teacher to teach a few lessons on perspective and perhaps facial proportions :) That said, it's pink and frilly and totally Skye, so even though it's a bit horrifying, I love this one too :D

The last two weeks have been a bit of a blur. There was prepping for the trip to Washington, D.C. (which I got home from on Friday), there was school, there was work, there was swimming lessons for the kids, there were flights, there was a road trip to Montreal, there were funerals, there were babies, there was knitting, and there was insanity. Suffice to say, I'm exhausted and thrilled and sad and just looking forward to things slowing down a bit.

Rob flew in on Friday about an hour after I flew in from Washington, DC (awesome trip, btw, but it was a training course for work, so not much to tell - I did get to meet two friends I've known from the internet for over eight years). We had an awesome weekend, he got his extra Thanksgiving, we had a 90 minute hike in the woods with the kids on Sunday, and then we took him to the airport this evening and watched him walk away to get on a plane to go home. Which sucked balls. I can't complain too much though, because I already have my plane tickets to go see him for American Thanksgiving, but it still sucks to have to be contented with the odd weekend here or there. He's worth it though :) He made my birthday pretty awesome.

I turned the heel on my first sock after I kicked myself in the butt a bit. Ended up taking me no time at all and it turned out awesome! Then I worked on my Tempting sweater for a bit and tried it on. It's actually a bit loose, so I went down a needle size (I've reached the point just under the bust). I'm really liking the way it's turning out, and I'm about at the half-way point. I'm hoping to get a bit more work done on it during the day (lunch hours). Kari finished her Rhinebeck sweater and is working on Sue's, and Sarah finished hers, so I've got to come up with SOMETHING. So socks and sweaters for the near future :) Curtain is on hold until I finish the sweater.

And now I'm going to go crash and it's going to suck, because I haven't been in the bedroom since Rob left. :( Here's to the next ten years passing really quickly!
Posted by Lynne at 11:13 PM