So Friday was knit night. I headed out to Bridgehead with the girls and everything was going great until BAM. Tooth pain. Really sudden tooth pain. Like worse than childbirth tooth pain. Not good. After a little while, I couldn't even see my knitting anymore, it was that bad. I cadged a few advil off Kari and waited for them to kick in. We headed for the pub. They never kicked in. Then the shooting shocks up the nerve started, and I was miserable. I went to the drug store and bought some T1 to hold me over until the emergency clinic opened at 9am the next morning and went home to bed. I don't remember if the T1 ever got rid of the pain, because the codeine knocked me out, and the next thing I knew it was 10am.

Saturday morning, I was meant to be making jam. All kinds of jam, and I was really happy that I'd be making jam, but... um... tooth pain. So off I went to the emergency clinic for half a root canal (which will be completed in two weeks). Holy effing OW. The root canal didn't hurt in and of itself, but the freezing wore off as he was working on me, and I was in more pain once he was done than I had been before I got there. Then I had the joyous fun of going off to work for a five-hour shift. I'm aware of the entire shift, but if you ask me to remember anything from it, only the last hour or so stands out. It was interesting.

Sunday, I slept until 2pm (yay codeine) and then the kids and I went off to Boston Pizza to celebrate my nephew's 2nd birthday (YAY CAEL!). I got him one of these: 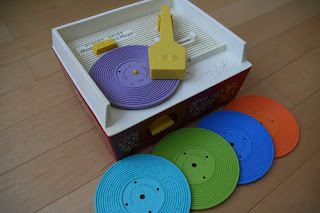 My brother and I had JUST been talking about these on Facebook the day before, and when I walked into Mrs. Tiggy Winkles to buy his present, there it was. So, of course, I *HAD* to get him one. I think my brother was more excited about it than my nephew was (of course... he's only TWO).

All in all, a very eventful weekend, and hopefully this week will be much quieter. I'm off to Sarah's graduation ceremony this evening, and hopefully getting the living room floor clean and ready to vacuum (still working on that).