I'm pretty excited :) Last night, we had to hit Rona for some plumbing supplies, so I took advantage and checked out their garden area. I brought home one Sunsweet tomato plant and two cherry tomato plants! (can't remember what kind they are off-hand). So now there are three beautiful tomato plants sitting on the balcony. I just hope they'll get enough sun where they are. If not, I may have to beg the landlord for roof access, since that's the only way they'll get full sun. 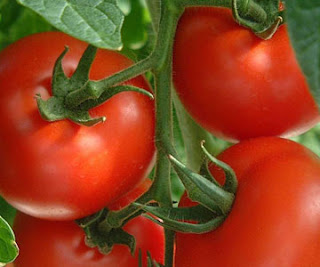 I was tempted to look for a rhubarb root, but to be honest, I really don't have anywhere to plant it. I am tempted to see if it would do well along the wall of Rob's garage, but that may be a project for next year (he has a rhubarb plant next to the house, but I think it's in too shady a spot, and it got planted pot and all, so the roots probably don't have enough space to grow). Besides, I get more than enough rhubarb from my mom's garden every year. I still have some of last year's in the freezer. I need to come up with a better freezing method though (the baking sheet thing is starting to look like a necessity... maybe I'll devote the bottom shelf of my fridge freezer to that from now on, since the stuffing it all in a ziploc bag and praying thing isn't working out too well).

None of the flowers we planted at Rob's took :( Granted, doing it late at night in April probably didn't help either. It was cold and wet, and I really should have planned things a bit better. Next year maybe :) He does have a lovely daffodil patch that comes up at the front of the house (leftover from an ex) that I've had fun with and the lilies may just decide to surprise us next summer. Suffice to say that slap-dash gardening as an afterthought is really not the way to go ;) My basil is really going crazy - I'm hoping it will continue to do so when I transplant it. The chives are doing so-so (whoever would have thought CHIVES would be hard?)... the marjoram is doing well, but the parsley and cilantro are pretty much dead again. I think next year, direct sowing  in the pots instead of using expandable coirs might be a better idea.

On the knitting front, I crocheted a huge, ugly granny square blanket that I think will be going to charity. I shouldn't really say it's ugly... it isn't. But the bigger the yarn you use to make a granny square, the bigger the holes will be, and this one has some pretty spectacular holes. It was really just to get rid of some leftover Pampas from Rob's blanket, and it served that purpose, so now it might go live at the Humane Society for a while. I've actually been making progress on the kitchen curtain, and the ten-stitch baby blanket continues apace. I'm looking forward to finishing one of these, since I really REALLY want to start on something else. (Socks, a shawl, anything!) We're going to be doing a Color Affection knit-along (c'mon, after seeing the one the Yarn Harlot made, who could resist?)

And because for some reason, whenever something I'm looking forward to is approaching, my brain goes into shut-down mode, I have to do a mad dash cleaning thing tonight and tomorrow before Rob arrives *sigh* If only I could function like a normal person, the house wouldn't always be a disaster and require rescuing before guests arrive... (he's not really a guest though... he has his own key!) Somewhere in there, I also need to pay the babysitter, buy new mattresses for both kids, and figure out when to get them delivered.  Never a dull moment.

Did I mention that there are tomato plants on my balcony? :D
Posted by Lynne at 3:47 PM