Today did not start out in the best way. It started with me curled into the fetal position in an incredible amount of pain. That continued for several hours (until after lunch) and made me want to drive off the nearest cliff. Fortunately for me, there's a distinct shortage of cliffs between my home and office. I have no idea why cramps make me want to die in the morning but always seem to disappear in the afternoon.

Work was largely uneventful, until my supervisor set me to a task (telling me it was super urgent) and then disappeared before I was done. I can understand not feeling well and leaving early... what I can't understand is not saying anything when I spoke to her TWO MINUTES before she left. Granted, that's not about me, but I've had a shit day, so I'm internalizing it. The urgent document? Is now sitting locked up in my file cabinet, so what was the point of rushing?

Picked up my daughter at daycare (where apparently the stomach flu had ripped through the place all day and nobody said anything to me) and then went to pick up the ex to do groceries. Got to his house and phoned him to come down, but he was still 15 minutes away on the bus, and we ended up having a huge fight (mostly my fault, but not entirely). Joy. The store was out of mint Aero (Rob and his son really like those) but I figure the Cherry Blossoms and maple candy will likely make up for that one.

Classes were cancelled again this week due to the strike. *sigh* I need to contact my prof to make sure I can still pass the class. Bought myself some sushi for dinner, but as I sat down to eat it, the bottle of sparkling water I'd bought overflowed and I managed to drop the tray of sushi trying to contain the mess/protect my laptop. Sushi all over the carpet. So no dinner for me. That, and soda water all over the laptop. (That seems to have been remedied nicely though).

I have a HUGE surprise for Rob, and I really really really want to spill the beans (I suck at delayed gratification) but I know it will be so much more of an awesome surprise if I DON'T tell him, but I really want to! I also managed to kill most of my cilantro and three of my four tomato babies by underwatering them :( I have one viable specimen of each left. I may buy a tomato plant or two when the nurseries start carrying them. Hopefully Jeff's cats will be able to resist eating everything while he's plant-sitting (they need to be watered daily or they dry out, so I can't leave them for four days). 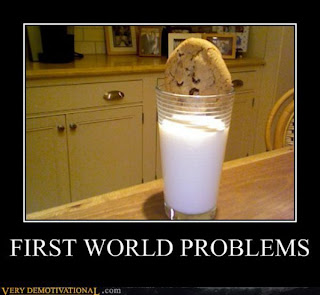 All first-world problems, to be sure. But the cumulative effect made the day suck. Then I poke around on a news site, and I discover that my day would have sucked ever so much more if I lived in Dallas County, Texas. And I am ever so thankful that I live here and that I am fortunate to have only first world problems.
Posted by Lynne at 8:25 PM