So that's where I've been since last Thursday! I left work at lunchtime, and hopped a cab to the airport. Two flights and seven hours later, I was driving up North Michigan Avenue in search of the famed Red Apple Buffet. (Sorry, the website SUCKS, but the restaurant is great! Food was FAN-FREAKING-TASTIC.)

Friday, we puttered around the house a bit, went to pick up his son, hit the cell phone store (Rob's hard on phones LOL), hit Fiddlehead Yarns in Kenosha, WI, and then bought a ridiculous amount of groceries. I cook a lot when I go over to fill the freezer so that the boys don't end up living on manwich. Friday evening, we went to Passover Seder at Rob's parents. It was... an experience :D Rob's stepfather Alan began the evening by stating that THIS YEAR, we were going to have a serious, PROPER Passover.... and you can imagine how things went from there ;) The boys (both the adult and the teenaged ones) seemed to take that as a challenge. The verdict: Matzo ball soup = AWESOME. Gefilte fish = edible, but ... um... well, it's fish brined in lye. What do you expect me to say?

Saturday, I started the day by making a huge batch of spaghetti sauce (which is now residing in the aforementioned freezer). We went out to lunch with Rob's genealogy group harem (he has a group of women who follow him around and vice versa... they're all older than his mother, but I still like to tease him!). They are the funniest, coolest bunch of girls, and we had a blast. Saturday afternoon, we went to the cemetery where Rob's father is buried and I took pictures of the grave site for his genealogy files, and placed a stone on his father's  marker. I was glad I'd gotten dressed for Seder before leaving, because it felt somehow more fitting that I was visiting in a dress, nylons and heels. We went to Seder with Rob's step-sister and her family and it was every bit as much an occasion as the previous night :) This group takes family seriously, and they really are a fantastic bunch of people. (I had gotten yelled at the night before for trying to blow out the candles after everyone left the table.. this Seder? no candles! SWEET! No one confusing the shiksa!)

Sunday morning, I made a cheesecake for dinner and a batch of chili that joined the spaghetti sauce in the freezer. Rob and I walked to the grocery store (about a mile, round trip, I think) to buy a bottle of pop (what can I say? I was thirsty!). Sunday afternoon was mostly spent doing house-type stuff, shopping for new towels and then making my seafood rosée pasta sauce (most of which is also in the freezer, but some of which was dinner). The lemon sauce I made for the cheesecake ended up wayyyy too sweet (like jarringly sweet), and I've determined that I need to stop using the Philly cheesecake recipe and find a proper one. Other than that, we had a good time :) We planted some flowers around the house and garage (hopefully some of them will come up!) and watched an episode of Speed Racer and then it was time to pack and go to bed.

4am this morning, we were (Rob was) up and getting ready to head to the airport. I slept very badly last night, so he went and showered, shaved, ate breakfast and THEN woke me up. I win :) Two flights later, I was back home with the kids and attention-seeking cats. The strike is still on at school, so no class for the third week in a row. This worries me, because NEXT week is our final exam, and we haven't covered a lot of the material necessary :( There's also our final project due next week, and I'm nowhere near done. *sigh* I am home, and while I'm happy to be back, I'm not happy to be alone. Pictures will follow after I've got them off the cameras and sorted out. So see you later, Chicago! 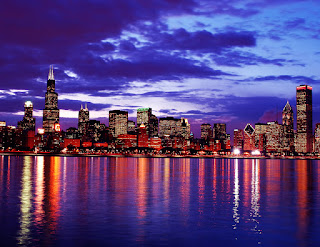