(Incidentally, this is my 100th blog post! Yay! Cupcakes for all! - oh, and apparently none of you want to read about recipes and plant pictures - noted!)

The plants spent last night inside the house (not protected behind closed doors) and the cats didn't eat them :) I am cautiously optimistic. It was necessary, since the temperature was meant to dip down below freezing last night, so I hauled them all in and put them on top of the freezer. Lynx was curious, but once I yelled at her a couple of times, she stayed away.

We got about half the livingroom done last night before we ran out of garbage bags. *sigh* I will be heading out shortly to purchase more (I hope... stayed home from work today with what I suspect is a stomach bug). I got a few loads of laundry done... now I just have to fold them and put them away! This is always the part that doesn't get done. I had a bit of a meltdown last night because Zachary left a cup full of chocolate almond milk on a chair in the front hall and Skye knocked it over. Both are at fault here, and I'm equally pissed at both of them, but I went off on Skye because rather than acknowledging the mess she made or, you know, trying to clean it up, she ignored it and left it there. I discovered it about half an hour later. ARGH. They will be scrubbing the stain out of the carpet this evening (carpet spray is something else we'd apparently run out of).

Groceries got done and almost entirely put away last night. I still have a pile of baby bok choy in the fridge, and this week I picked up some kale and red Swiss chard. I'm totally impressed that the kids got the freezer stuff put away this time before I discovered it thawing on the kitchen floor! Maybe something is sinking in here! (Then again, they left their pudding containers on the couch and floor after dinner, and Skye even left her half-uneaten plate on the couch until I yelled at her to come pick it up.) Zachary even replaced the cat litter the first time I asked him!

So on to knitting... the curtain hasn't gone anywhere. It's just on a time-out because it requires just a little more thinking than I'm able to devote to it right now. So this is what I've been working on: 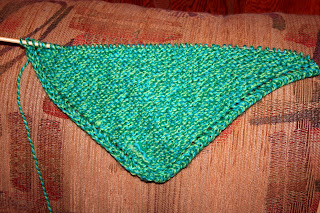 This one's a baby blanket I'm doing using the basic dishcloth pattern found just about everywhere. It's Bernat Softee Chunky in the Tropical Twists colourway (which is AWESOME). It's for a co-worker who's about 5 1/2 months along, and I'm hoping to finish it in the next week or so. It's pretty mindless stuff. Straight garter stitch with a yarn over 2 stitches into the beginning of each row. The trick for me comes with deciding when to switch directions and start decreasing. I'll cross that bridge when I come to it :) 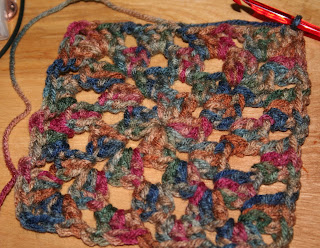 This, ladies and gentlemen, is my very first granny square! It took me about two hours to get it going last night (I kept ripping back because it looked like ass). It still looks like ass, but it's the nicest ass I've ever produced, and once I get the tension down, I think it'll look fine :) The one in the picture is four rounds, which is where I left it last night. Right now, I keep picking it up, doing a round, putting it back down, and it's up to 7 rounds :) I think it's meant to be a baby blanket, but I'm not sure yet. It'll tell me when it's done. For my next trick? I want to learn how to do different rounds in different colours. I haven't learned how to add in new colours using crochet yet.

Sarah (shmoopsie-pooh) has lent me her Knitted Monsters book. I am LOVING these guys!!!! There are so many babies coming into my life right now, I may just decide to knit these instead of sweaters or blankets (because as cute as baby sweaters are, they make me froth at the mouth, and blankets seem to take forever!) Oh, and I recently heard that one of my nieces may be pregnant again? *squee* (although I'm still one grand-nephew behind! I swear, Nahte's gift is being ruminated as I type this!)

What's your favourite go-to project for new babies? Do you have different projects for family and friend babies? Throw me a bone here, folks... I'm surrounded by teh preggers!
Posted by Lynne at 2:28 PM