That's what this entry is going to be, because I managed a whole hour at the gym tonight and my arms are SORE.

Monday, I went to the gym after work, and I wasn't feeling too hot... Or rather, I *was* feeling too hot. I was sweating like a pig on the recumbent bike, and couldn't finish the 15 minutes (I quit after 12 1/2) because I felt really nauseous. Hit a couple of weight machines, and felt even worse, so I quit while I was ahead. Class was cancelled, so I went home. Tuesday, I went for groceries after work, still not feeling too hot. Had a steak for dinner, and it sat there in my stomach, all night. It was still there when I went to work the next morning. Oh joy. Hernia flare-up.

I have a hiatus hernia. My stomach sometimes slips up between my diaphragm and my chest wall (I think... it could be other organs) and gets trapped, so food has nowhere to go and can't be digested. After a few hours of this, stomach decides it's going to reject whatever hasn't been digested, so it was a fun night. Wednesday was the farewell party for my boss/coworker (he's not really my boss, but he kind of is in my mind) who's going back to Halifax so his wife won't COMPLETELY forget what he looks like. I will miss him very much :( I made him a sash that said "Mister T.S.I. 2012" and a photo collage from all of us: 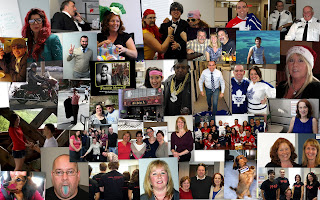 He *loved* it :) (If you click on it to make it bigger, the guy in the Freddie Mercury poster is the one who's leaving - the guy on the right, that is LOL) We passed the mat around the office and had everyone sign it :) The party was a blast, and I decided that since it was such a special occasion, that a drink wouldn't kill me, so I had a half-pint of some very lovely and mellow cider (and I can't remember the name of it!). UGH. Big mistake. I felt sick ALL night and not too hot this morning either. My stomach seems to be trying to tell me something, so tomorrow we're going to go on a bit of a cleanse, I think.

My family is going to the sugar bush on Saturday, but I'm working at 10, so my mom asked me to drive them to her house... IN ORLEANS. The sugar bush is in QUEBEC. Everybody who's going practically has to pass right by my house to get there. *sigh* (but then, the kids wouldn't be at my house, they're going to be at their dad's, so that complicates things a bit, I guess).

So as I said, I did an hour at the gym tonight... someone was using the recumbent bike when I arrived, so I went straight to the weights, and did the bike half-way through the workout LOL I still didn't get any bicep or wrist stuff done, nor did I play with the stability balls, but the rest of me hurts! I think I'm going to go lie down and read now :)
Posted by Lynne at 8:53 PM