I had intended to get my whole house cleaned up this week. Has it happened? Hell no. There is considerably more floor and clean laundry than there was at the beginning of the week, but that's mainly due to Zachary being left home alone every so often. Today as Skye and I were coming home from running errands, I looked up at her window and noticed she'd cut a square from her window screen. *SIGH* I really don't know what possesses her sometimes. Zachary must really want his nice new purple bookshelf in his room, because he's actually in there cleaning, unasked, as I type :)

I went and dropped off the renewal application for my passport this morning. They said I should receive it in the mail in two weeks :) It's less than a month before I head down to Chicago for Easter weekend! :D I am so psyched! I didn't end up going to the gym yesterday though, and I'm feeling the lack today. I may go this evening after we've had our eye exams. I made a new friend today at Skye's appointment. Another patient happened to be a new knitter and she was fascinated with the baby sweater I was working on (this one): 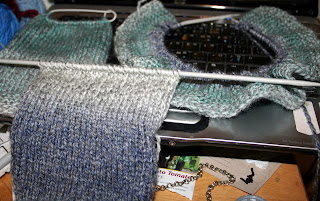 (there's a bit more done on the body now, since I just spent an hour and a half on it). She's fifteen years old and only knows how to do 2x2 rib, so I showed her Ravelry, Knittinghelp.com and a few other resources online, and she's very excited now :) (I also pointed her toward Knitting for Dummies, which is how I learned).

I did promise pictures of the two scarves I finished, so here they are. One-Row Scarf in Balitex Ruthy's Fat Yarn (hand-dyed using Jacquard acid dyes by yours truly) on size 10.5 needles (6.5mm): 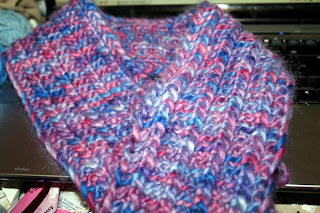 This one is 4" wide and 32" long. Just the perfect length for short ladies' coat scarf (one that you just tuck the ends into the front of the coat). The other one was a bit longer but was done on bigger needles, so it's all good. This one was knit in Loops & Threads Cozy Wool (Michaels) in Sapphire and Merlot on size 15 (10mm) needles. It's 4" wide and 78" long, and I knit the red at one end, then striped a few times, then the other end was done in blue. I'll see if I can get a better picture of it later. 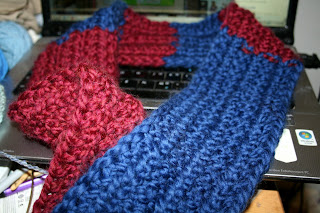 I'm hoping to make a bit more progress on the apartment tomorrow, since I won't be going out anywhere (so far, there have been errands every day). And I should be able to spend more time at the gym, since I'll be on my own on Friday :) It still feels like the house is empty when Rob's just left, but we're slowly getting back into a routine (the kids notice it as much as I do... I don't think the cats care). Once I've got things cleaned up a little, I'm going to attempt to put up some art around the house. I bought a few paintings last year that I'd like to put up and I have a kit to make a 9-square canvas montage that I hope the kids and I can have a bit of fun with (clearance merchandise FTW!)

The sprouts are all looking great. I think I may only end up with three viable tomato plants. The two sprouts in the fourth square are all droopy and lazy. The chives, cilantro and basil are all going crazy and the parsley is finally starting to come up all over the place. I can't wait until it's time to transplant! I'm still trying to find window boxes. May have to make a special trip up to Lee Valley for those. Spring is definitely here! It's 10 degrees and everything's melty! The trees in our neighbours' yards all have buds on the branches, and my family is making plans for our annual sugar bush outing. YAY SPRING!
Posted by Lynne at 4:17 PM