I apologize in advance for the quality of the pictures... I was using my daughter's camera, which only has an LCD screen (and I need new glasses). Guess what I'm going to do with all of this? 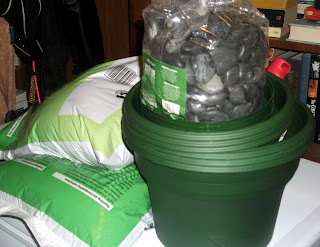 Pots, plant food, rocks and soil! It's transplanting time! I have no idea where I'm going to put all these pots until they can go outside though. I may hold off on transplanting most of the herbs until later.

In other news, I'm still not finished with the baby sweater, because it has become my "at work" knitting and I don't bring it anywhere else. The curtain hasn't been touched either. Last night was report card night at our house, and it took up most of my spare time. Tonight is swimming for the kids (and probably gym for me, since I skipped yoga class today - I can already hear Rob going, "WHAT????" LOL)

Weirdest thing happened to me this morning. I had a sudden bout of dizziness, the room spun for about 5 minutes, and then my head exploded and the world was right-side up again. Needless to say, with a somewhat nauseating migraine, I was not about to contort myself into a pretzel for the amusement of others. So no yoga today. I feel bad though, since it was our last class in this session :( I'm hoping we'll start up again, but if we don't, I may have to find myself a class nearby.

Someone asked me last night what the most Canadian thing I've ever seen was. I have to admit, a few weeks ago, during our most recent snowstorm, I saw a guy in a pickup truck stop at a red light, climb half-way out of his truck, and clear his windshield with a hockey stick. I only wish I'd had a camera to capture the moment :)

In other news, there's something wrong with the ABS on my car. It's been engaging at odd moments, sometimes while I'm not even braking... so my car is in time-out right now, and I'm driving Jeff's until I have the money to fix mine (again with all the unexpected expenses cropping up at once! What's with that?) If anyone has any ideas or knows what's going on, lemme know :)
Posted by Lynne at 3:35 PM