No, I don't have a cousin named Vinnie... What I do have is a smart-ass boyfriend ;) Last year, he asked if I'd make a curtain for his kitchen window. I thought about it, had a few false starts, and then gave it up to work on his blanket. I finally found the perfect stitch pattern that's open enough to see outside, but has enough closed areas that people can't see in and it's not girly! So I swatched it up: 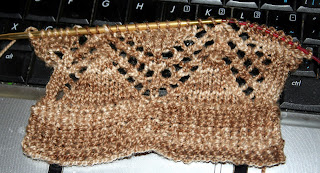 Each pattern repeat is 2.5 inches wide, so I emailed Rob to ask if he knew off-hand how wide the kitchen window was. Important bit being I said "the" kitchen window. This was his response (in its entirety):

Rob Schwartz:  Because you don’t have a kitchen window.

In other news, plants are all coming along nicely, and about half the parsley has sprouted (I'll take those odds, considering I thought the entire packet was a dud), and Skye and I went to yoga class today (it was brutal). The baby sweater continues apace.
Posted by Lynne at 3:27 PM