Sorry for all the dead air around here. Last week sucked, and then Rob was here over the weekend, so I was selfishly offline for most of it :) However, I have updates and PICTURES today!

First off, our weekend. He was supposed to arrive Thursday evening, but events beyond our control conspired against us. The first leg of his flight (Chicago-Toronto) was cancelled, so they put him on a later flight, but it arrived in TO after the last flight to Ottawa left, so he spent the night at the Royal York (poor baby, right?) and then hopped a plane to Ottawa first thing in the morning. We went for breakfast, hung around the house for a bit, and then met up with some of my coworkers for lunch (he's wanted to meet my boss for a long time - they have a lot of common interests... I invited a female along so I'd have someone to talk to once they geeked out on bikes. Not bad, but I should have sat them next to each other instead of across so that A and I could actually talk to each other). Then we hit the gym (YAY) He did follow along and finish everything I did, but I think he was a bit surprised at how much I've been doing. Then we went to knit night and he had a great time, and it ended with a trip to the pub to have dinner and drinks with a friend. Saturday was mostly spent doing stuff around the house, and in the afternoon, we took the kids (+1) to play laser tag. Well, ROB took the kids to play laser tag. I sat in the lobby and knit. I finished the last bind off on his blanket Saturday night. Sunday was spent finishing up things around the house and hitting the gym again, and then taking the kids to my parents for dinner. I left to drive Rob to the airport (which always sucks) and then went back to my mom's for a turkey dinner that couldn't be beat, and now you know what I did all weekend!

So here's the finished blanket: 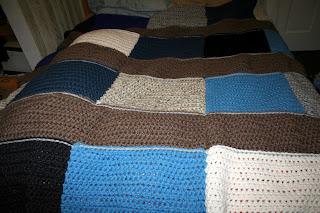 It's on my bed, which is a queen size, and you can see that there's ample overlap on each side. Sorry for the lumpy appearance, I left my comforter and my body pillow underneath. This is Rob being a goof: 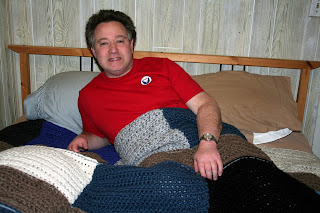 (I don't know who taught him to smile for pictures, but I've got to break him of this goofy grin - I'm only partially joking. This is NOT how he smiles when there's no camera around.)

He actually helped me get the last strip at the top attached to the blanket (since I did it in my cramped bedroom and not on the big boardroom table at work or on the folding table at my mom's like I'd done with the rest). And I was right to tell him to bring the BIG suitcase, because the blanket took up ALL of it. He was able to pack a few books and flat things on top of it, but no clothes. (Becky, he brought the first book of that series home for you and the kids to read - I'll bring the rest when I come down for Pesach).

In other news, my "garden" is doing a bit better... it's amazing me how much it changes every day! I still can't get a bloody avocado seed to sprout (I think I've got sterile pits... they are from the avocados I buy at the grocery store), but everything else is sprouting like mad!

There are tomatoes and chives (I pruned the tomatoes this morning, so there are some stubby little stem ends in there): 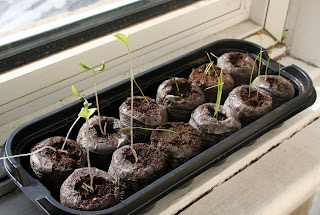 There are some basil and cilantro sprouts that are doing AMAZINGLY well. They're not slumped over, by the way... I had just turned the tray around because they were leaning toward the sun: 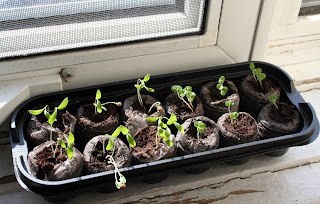 I'll admit that I don't know which is which, as I didn't label them, but I imagine it'll be easier to tell when they get bigger (y'know... they smell and taste completely different and all).

The parsley... well, I kind of overwatered the parsley and didn't notice until a few days later, so I may have drowned some of them. For the longest time I thought I'd killed all of them, but then something really neat happened. About a week after everything else started sprouting, I saw this: 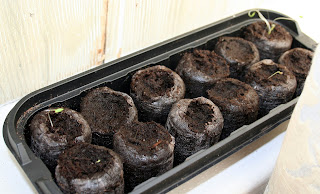 Excuse the over-exposedness... it was really sunny, and it was hard to get down low enough to take this picture (they're sitting on the radiator under my window so they can get some light and heat). Not sure what I'm going to do to get these guys enough sunlight because my windowsill is very narrow, and doesn't have enough room for all three trays... it's also the only one the cats can't get at (and therefore eat all my plants).

I'm still planning on grabbing a rhubarb root somewhere and planting it in a big pot (still need to find the big pot). I wonder if the landlord would give me access to the roof. Balcony space is quite limited and the neighbor uses it too (shared balcony). So that's what I've been up to :) Pictures of the baby cardigan will follow once I've gotten a bit more than two inches of the first sleeve done (I got distracted by the scarves... finished one and I'm in the home stretch with another one).
Posted by Lynne at 12:01 PM