Where does the time go?

I ask myself that every single day. I have no idea, but it's not here. Because I never have enough of it. Rob is probably piping up "Cleveland!" as he reads this, because he's Rob :) But I don't think I'd have any more time in Cleveland than I do here. 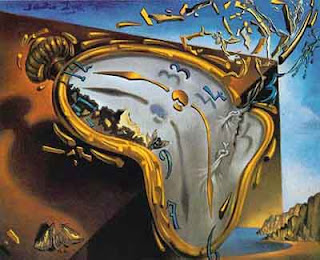 Tonight is my final exam. YES. The class - the class with that teacher - she of the mercurial mood swings and irritability issues - is finally over! I don't anticipate any problems. I'm walking into this midterm with a solid B+ (if not an A-) so I think I'm okay. That, and I get my Tuesday evenings back for a few weeks! Jeff and I will both be greatly relieved.

The house, on the other hand, is an absolute disaster, and I have no clue how it keeps getting that way. Well, okay, that's a bald-faced lie. It gets that way because I'm lazy and I've raised two children who see their mom being lazy about cleaning, so they're lazy about it too. I need to clean it up though, because Rob arrives on the 22nd, and then he's here for a week and a half, and gross house needs to be decent before he gets here. (That, and I'm tired of tripping over bits and pieces that weren't on the floor FIVE BLOODY MINUTES AGO!)

I had to sit and watch Chanukah candles burn last night (I got a late start due to the class-that-wasn't at the Temple), so I decided to tackle the fingerless mitten that had been kicking my ass. I'm knitting Laura's Ribbed Mitts by Carrie Barraco. Problem is, she doesn't describe her increases in the pattern. She just says they're Cat Bordhi's La-link and La-rink increases. Well, that's all nice and good, but I've never heard of Cat Bordhi's La-link and La-rink increases. She does provide a youtube link, but hell, I don't sit around knitting while surfing the internet. I was incredibly frustrated at the lack of detail provided in the pattern. My increases didn't look ANYTHING like her gusset increases, and I was just about ready to chuck the whole thing. Okay, so last night I watched Cat Bordhi's video (the link in the pattern, btw? NO GOOD. Had to search it myself.) My increases now look like the gusset increases in the pattern, and I am kicking ass and taking names with these mitts :) So much so that I cast on a hat.

The lovely Stephanie Lynn (aka handmadesolace on Ravelry) created a fantastic hat she calls the Bulky Slouchy Thing. (This is not a published pattern, just her notes!) I found it while searching for something to do with my one lonely skein of Araucania Patagonia Nature Cotton. 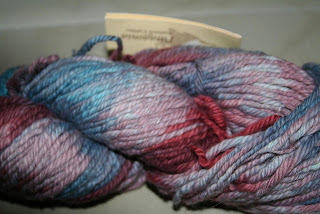 Back when I first learned to knit, I bought my yarn at Michaels or at Walmart. Then I discovered this great shop downtown called Knit Knackers Yarn Warehouse. It was in an old house on James Street in centretown (Ottawa), and it was fantastic. They had this huge bin that was all odd balls, and they were usually reduced in price. I actually got this gorgeous thing for $3.99! Unfortunately, Knit Knackers has since moved to Smiths Falls, and the fantastic staff have moved on (worry not, they're apparently all alive and well at Yarns, Etc. on Nicholas Street!)

Anyway, I'm still plugging away at the mitts, the Falling Leaves socks, and now this hat. Everything else is temporarily on hold until I cast off either the mitts or the socks. Tonight, my goal is to clean up the bathroom and to set the dishwasher going. Start small, right?
Posted by Lynne at 3:00 PM