Trauma means I get chocolate: a PSA.

Today wasn't fun. I had to go have a pelvic exam to check out a lump that's been hiding in my nether regions for a while. TMI? Imagine having to explain to the MALE nurse that no, I don't want to have a joint appointment with my EX-husband because I'm having a pelvic, thank you very much. In front of a waiting room and reception area full of staff and patients. Don't get me wrong. I'm sure he's a nice guy. He just doesn't have much tact or bedside manner. Then explaining to said gregarious male nurse exactly what the pelvic is for (thankfully in the privacy of an exam room)... he then told me to remove my pants and underwear and to cover with "this" - this being a large square of paper. I was half-afraid he was going to stick around, but he left the room at that point.

So much poking and prodding later, I have to have some blood tests, before which I  have to fast for 12 hours, so there we are. No answers, no closer to knowing what's going on, but I'm glad I went. All I can say is that the speculum? Was obviously invented by a man.

Since I've been poked and prodded and violated in just about every way you can legally pay for, I can have some chocolate now, right? RIGHT? 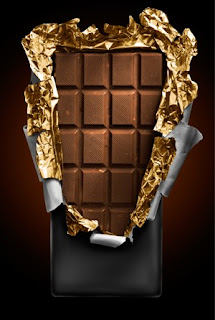 I really wish this was Friday. Because I need a hug, and Kari and Sue are my go-to girls for hugs. I'll admit that I'm not the most mature person in the world when it comes to seeking medical advice. Especially when I'm scared or worried. I may have had a mini panic-attack in the exam room while waiting for the doctor to come in, lasting throughout the exam, and going full-force when the doctor left to let me get dressed again. Don't get me wrong, my doctor is the sweetest little thing in the world, and she's very reassuring and thorough, but dammit, when I'm having my ladybits felt up and it's highly unpleasant, and I have all these ideas in my head of what COULD be wrong? I may perhaps freak out just a little. And I may have cried a bit. And I may still feel like bursting into tears at any moment.

We only get one set of ladybits, girls, and it's really important to take proper care of them. In other words, it's important to go to the doctor and have a torture session once in a while. We may not like it, and we may be scared, but it's a necessary evil. Guys, just because you don't have ladybits doesn't mean you're exempt. It's important to have things like your prostate and colon checked regularly too! It sucks, but you can also have chocolate afterward. I promise.
Posted by Lynne at 3:33 PM