I've been meaning to use this 13-bean soup mix I bought for a while now... Today, I took a "mental health" day to sort of decompress from work and school a little, so I rinsed the beans last night. It says "soup mix", but really, it's just a combination of 13 kinds of legumes. There's no flavoring or anything in there. My kids were kind of surprised to see how much water the beans absorbed (while still being too hard to eat) overnight. I should have taken pictures.

I did accomplish a few things today already. I finished the Chastain Park Shawl, for one thing. Lookit: 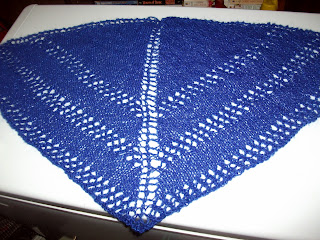 I've been reading too much Yarn Harlot lately, and I desperately want to cast on a pair of socks (just to prove I can do it!), but I can't justify that when I still have a baby blanket to sew up, Rob's blanket to sew up, and Kimery's Cowl (the Gap-tastic Cowl on Ravelry) on the go, which is a commission knit. It'll be my reward for finishing up a few things. The other projects in my metaphorical basket are all long-term projects and aren't meant to be finished any time soon.

I mentioned on Daily Mile that I've started watching Heavy. I'm finding it really motivating. FINALLY, a show with actual people that I can relate to, that I can feel struggling, that I can empathize with because I am living what they were living. I cry, of course I cry, but it's helping. Last night, for instance, it got me on the treadmill. Which is awesome, because I'm not too fond of the "dreadmill". On to soup :)

Everything but the Kitchen Sink Soup

Toss it all in a pot, bring to a boil to cook the beans and seafood, and then reduce to a simmer for 30-40 minutes.

I had a few leeks and some nice cauliflower I could have tossed in, but my pot wasn't big enough. I decided to save the leeks and make a nice pot of cauliflower-leek soup later on instead. The bean mixture really is a motley combination. It's called Bob's Red Mill 13-bean Soup Mix and it has navy, black, red, pinto, baby limas, large limas, garbanzo, great northern and kidney beans, black-eyed, yellow split and green split peas and red lentils. The frozen seafood mixture I used is from Sea Quest and has octopus, cuttlefish, squid, shrimp, clams and mussels in it (and I added a can of baby clams for good measure). I pretty much always use vegetable cocktail as a soup base (rather than water) unless I'm making a clear, brothy soup (like cabbage) or a cream soup (like the cauliflower-leek will be). It packs more of a vegetable punch and it removes the need for fats like olive oil to add flavor. It does increase the sodium content a bit, but you may have noticed that there's no salt in the above recipe. I don't use it. Heck, I'm not sure I even have any in the house.

I will be having a bowl of this with a cheese stick later and it smells SO good! (I'd show a picture, but it basically just looks like a big pot of red stuff... i have to learn to take more pictures during prep!)