First off, Rob wants me to correct something I said yesterday (he didn't actually ask, but I feel I should) :) While he did not grow up with body image problems like I did, he has in fact experienced a bit of embarrassment and frustration when faced with hard-core regulars at the gym (he started going there to recover from a broken ankle, and it was very slow going at first... kind of a pisser when the guy next to you has been running for an hour and you're hobbling along at 1.5 miles/hour and getting winded). So the fact that Rob is currently in much better shape than I am should not be taken to mean that he's never had a hard time in the gym.

Anyway, I have a few leads on a possible trainer for a couple of sessions, so we'll see how that goes. Tonight is public swim, so I'll bring the kids, toss them in the pool, and tentatively approach the gym for round two. The elliptical will not be spoken of again. Tonight we're going to try a leisurely ride on a stationary bike (I haven't successfully gotten on a bike since I was 18), perhaps some treadmill, and then we'll see. Maybe if I can manage more than a minute or two on the bike, I can split my time between the two machines.Zachary tells me I should play "Eye of the Tiger" while I'm exercising to get motivated LOL I think the kid watches too many movies.

I've also started journaling my food intake on Fitday in the interests of seeing what's going on. Right now, I'm realizing that I don't need as much first thing in the morning, but I need to increase my lunch (just ate a can of tuna because I was starving at 3pm...) So far though, I have managed to maintain a near-perfect balance (however, this does not count dinner...) 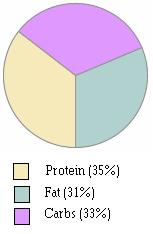 Working on it :) Which is also what I've been doing with Kimery's Cowl (poor woman, by the time it's finished, it'll be spring and she won't get to wear it!). I did cheat on it slightly last night, because I'd forgotten it at the office, and a tiny bit today at lunch because I ran out of yarn and had left the other ball at home (anyone noticing a trend?). MILES of seed stitch, I tell you! (Never mind that all the yarn in this pattern doesn't amount to more than 220 yards...) It's growing, and I'm currently half-done, since it's a two-ball pattern, and the first ball is all used up. It will be coming home tonight to be worked on, whether I like it or not ;) I also have laundry and dishes to get to, which I might if it means I can stall on this a bit more LOL There! That's how to get me to do housework! Give me something I'm not enjoying knitting and make me work on it :)