Well, not exactly confessions, and it's well after midnight, but meh.

I went to a finishing class today, relearned mattress stitch, and practiced my kitchener stitch and picking up stitches. I also learned a better way to increase! It was an awesome class, but the headache I woke up with had bloomed into a full-blown migraine by the time class was over, and I drove home in a haze of pain. I had intended to go christen my new gym  membership after the class, and then head to a friend's house after dinner, but it was all I could do to down some Tylenol and drag myself to bed.

After a five-hour nap, I felt pretty good :) I've been working on something I have absolutely fallen in love with: 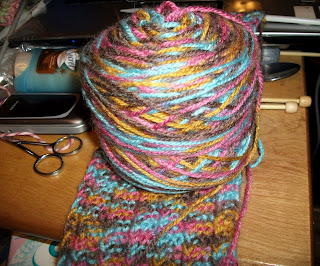 This is the Yarn Harlot's One-Row Scarf  (hers was handspun, mine is made from some Rozetti Always I bought from Knit Knackers back when I was first learning to knit). This pattern is so easy, I can knit it in my sleep. It's four stitches. Seriously. That's it. And this yarn shines with such a simple pattern. As the girls at knit night described, it looks like Reese's Peanut Butter Cups with Cotton Candy ice cream :) These colours shouldn't work together at all, but they really do! I really wish I could still get this stuff (maybe not in the same colourway), but I bought it from the odd balls bin, and they don't carry it anymore. From what I've seen on Ravelry, I'm one of three people who's bought it ever.

I've also started putting together the baby blanket that goes with the BSJ, so that gift will likely be in the mail in a week or two. In other news, since my trip to the gym was pre-empted this afternoon, I'll be going tomorrow morning. Wish me luck. This will be the first time I set foot in a gym since Jeff and I had that YMCA membership nine or ten years ago (I went four times... I was the only fat person in the place, and I felt horribly uncomfortable).

I have to start stepping up my class reading this week. I have a 200-plus page book to get through, write an analysis/review of it, and then find two novels from different eras to compare (I don't KNOW any French novels other than the ones I've read for school in the past. Ugh.) I want to try to get at least a draft of the analysis written by the time Rob comes to visit on March 1st. The fun never stops :)
Posted by Lynne at 2:58 AM