I'm alone in the office, and I got a ridiculous amount of shit done so far today, so I'm taking a minute to blog ;)

Fitness - I'm loving having the treadmill operational again. Unfortunately, this has coincided with warmer weather outside (meaning sweltering hot in the apartment) so I've been doing more walking outside and other things. I've been trying to figure out how to make my kitchen big enough to do yoga in. I have almost enough space... this morning I was futzing around the back room - the one where the treadmill lives - and suddenly had an apostrophe! (cookie for the reference) The back room is TOTALLY big enough to do yoga in! It's carpeted, but that's okay. I bought myself a thick exercise mat at Walmart the other day, and I'll put my yoga mat on top of that and I'll be golden! I even bought some nice mellow yoga-doing music :) I'm tempted to bring my yoga mat to Maryland this weekend, but I'm sharing the car with two other people, so I have to pack light.

Knitting - TADA!!!!! I finished the fingerless mitts! I haven't taken a picture of them yet, but they're done, ends woven in and all! That's only my fifth finished project for 2013. *sigh* I restarted Rob's socks as soon as the second mitt was off the needles, and then goofed around row 6. So I'm putting them in time-out until my brain realigns with my fingers and I am able to knit on DPNs again *sigh* Work has been progressing on the Strawberries and Cream top. Once we're back from Maryland, I'll have to put it on two needles so Skye can try it on. I may try to cast Rob's socks on again tonight or tomorrow, since I'll need Maryland knitting. Oh, and did I mention that Sue, Kari and I are taking Two Tangled Skeins to MARYLAND SHEEP AND WOOL FESTIVAL? That's right! We're leaving Friday morning, and we'll be recording an episode of the show at the hotel! I'm SO EXCITED!!!!! If you're there and happen to see us wandering around, come on over and say hi! We have buttons :)

Food - not much to say, other than to squee over these bacon "mats" we tried to cook on Saturday after recording the show. 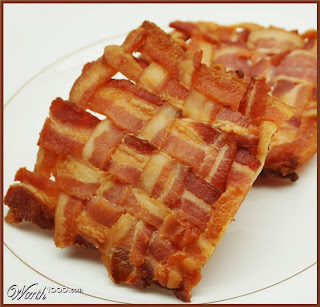 Ours needed to cook at a higher temperature than we used, so I'll try again this week. They're meant to be road-trip food ;) I'm also in charge of lunch meats and sammiches. Tomorrow, I need to bake some muffins and pick up a loaf of bread for the PB&Js. Sue has bought veggies to snack on, some dried fruits and snack foods, and Kari is making us cinnamon buns for breakfast and a few other bits and bobs. We usually pack all our food to avoid eating out. We know how to road-trip ;)

School - Not much to say. I have Judaism class tonight, and I'm looking forward to going home afterward. It always seems to be on the night before I have a class that I can't fall asleep no matter what I do.

Everything else - I am absolutely fascinated with my pretty hot pink nails right now (Essence Color & Go in Ultimate Pink - cause apparently I'm a stealth girly girl). I discovered last weekend that I'm a coward and can no longer ride a two-wheeled bike. (I was terrified, and I only coasted about 10 feet). *sigh* To be fair, the last time I rode a bike that wasn't attached to a stand in a gym was when Zachary was ... um... three? I'm pathetic. Thankfully, I have a boyfriend who likes to build custom bikes in his spare time and he has a plan. I'm not sure what the plan is yet, but I'm optimistic! I hope I gave someone a bacon urge with that pic up there, because I definitely gave myself one!
Posted by Lynne at 3:40 PM