So on Monday, my red "check battery" light came on. I phoned Rob up (he's my own personal Car Guy) and asked him what up. He said, "Turn around, go to Jeff's and get his car. YOU DO NOT DRIVE THE CAR WITH THE CHECK BATTERY LIGHT ON. um... Well, I was almost all the way to temple for Judaism class, so I figured I'd drive the car to Jeff's afterward and grab his car before going home. So that's what I did. I drove the Toyota around yesterday, and then picked my car up this morning to drive it to the garage.

I get the kids off to school (there was some drama, but that's part of having teenagers), and headed off. Waiting to turn left onto the inter-provincial bridge. Waiting... idling.... suddenly the orange "check engine" light comes on and the car starts to shudder... oh no. Not now. Please?

The alternator had officially died. IN the left-hand turn lane. In the middle of morning rush-hour traffic. Oh God...

Of course, since the alternator died, there's no electricity to power small silly things like, oh, say LIGHTS? Like those emergency flashers you turn on to indicate that your car has broken down. You know, silly little unnecessary things like that. So I got out of the car, opened the hood (to show that the car was broken down) and called roadside assistance (and the local news radio station so people would know to avoid the bridge). In the first five minutes, it became apparent that most people were not paying attention, so I opened the driver's side door (which would be more visible from behind the car than the hood would be) and waited.

In the 95 minutes I waited for the tow truck, I shit you not, over sixty cars pulled right up to my back bumper (I wasn't at the light, I was a good ways back in the turn lane) and started honking at me. Mostly driven by little old blue-haired ladies (yes, I kept track). One, driving a BMW, got very irate and spent somewhere between five and ten minutes honking incessantly and screaming at me from her driver's seat. I motioned to the hood and the open door. I motioned for her to go around me, but no sir, she was NOT leaving that turning lane for love or money, and she just kept screaming and swearing at me. It probably didn't help that this struck me as absolutely hilarious and I was laughing hysterically.

One guy, stopped while going around me by a red light, rolled down his window and kept motioning for me to do the same. I kind of shrugged at him. My car has power windows. No electricity, no windows! He kept yelling at me to put my blinkers on. NO ELECTRICITY, I'd yell back. "EMERGENCY FLASHER, CALISSE!" he finally screamed in broken English. "PAS DE JUS!" I yelled back. He started swearing at me :) One policeman I've had the misfortune to deal with in the past drove by FIVE FREAKING TIMES and didn't stop once. I think he recognized me. This also struck me as hilariously funny and I'd giggle whenever I saw him drive past, studiously avoiding me.

Three kind souls stopped and asked if I needed assistance. Out of roughly a thousand that passed me by. Not terrible odds. This, however, is why I will always maintain my roadside assistance subscription. Totally worth the price of admission, and I don't have to get my hands dirty :) 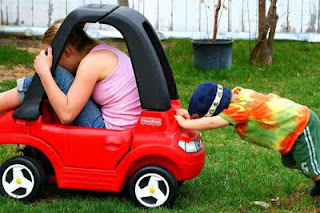