Right now, I still have Rob's curtain on the needles (poor Rob... he may get it some time around his 50th birthday - which isn't for a long time LOL), I have three baby sweaters lying around that still require finishing (i.e. sewing on buttons, one's not even assembled yet), I have three baby blankets in various stages of completion (the white crocheted one won't take long, it's a match to the one I made for my nephew in about 3 days, the orange one is my "movie watching" crochet project - should go quickly, but I haven't been watching movies lately, and the blue/green one that's for a friend's baby in Chicago? I can NOT get motivated to work on). Don't get me wrong, Frankie Brown's Ten-Stitch Blanket pattern (Ravelry link) is beautiful, but oh so boring (miles of garter stitch). I also started a Color Affection shawl - how could I not when the Yarn Harlot made it look like such fun? But I haven't progressed beyond the first few rows because I felt guilty. I haven't touched the Riverbed Socks (a test knit for a friend) since Kari unraveled them for me at Knit Night last week. *sigh*

The plan is to finish the white blanket this week, work on the green one almost exclusively until it's time to go to Chicago (so, y'know, I can give it to the mother before the kid's in college). That's my home and knit night project. The Riverbed Socks will be my "at work" project for lunch hours. Color Affection is on hold until I get either the 2nd baby blanket or Rob's curtain off the needles. I'm also going to need some knitting for the 2nd trip to Chicago (four days after I return from the first), so we'll see what I can get accomplished then :)

I have not gotten the cherry jam made, and I am hanging my head in shame. I let $15 worth of cherries go bad because it was just too damn hot to do anything about it. Kari loaned me some baking sheets so I could freeze them, but I didn't get around to it in time, and... yeah. I'm a lazy ass. I also didn't get the canteloupe jam made. I am planning a batch of apple butter for this weekend, since I got an amazing deal on a couple of bags of slightly (very slightly) bruised Granny Smiths. The boy's supposed to help me with that, since he wants to learn how to make it.

The scale is in time out. I've been walking every day (I skipped ONE day because I was really sore and not feeling all that well) and my weight just keeps creeping up and up and up. This morning, I stepped on and just about had a heart attack. Up SIX pounds from yesterday? Screw you, scale. My clothes are starting to fit better again, and I've been walking religiously. There is NO FREAKING WAY I gained six pounds in one day. I feel like crap though, so it's time to start being a bit more careful about what's going into my mouth. This is probably the hardest kind of addiction to break, because it's not like I can stop cold turkey - I need to eat to survive. Gotta step up the exercise, and eat a bit healthier. (I thought I *was* eating better, but apparently the scale disagrees). 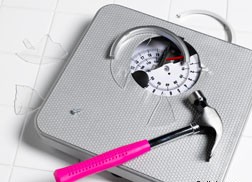 All I've eaten today is half a small cottage cheese cup (which I think is 2/3 cup anyway, so I've had 1/3 cup cottage cheese), and a couple of Greek pitas with salsa. And I feel like I ate an entire Vegas buffet. It's 2pm as I write this, so it's not like I ate all that in the space of one meal... I kind of nibbled on it all day. I know Greek pitas aren't the healthiest things around, but they were going to go bad, and ... well, I have no excuse. But I haven't had lunch (not hungry AT ALL) and I haven't had any junk food. So why do I feel like I've been pigging out all day? Bleh. Time for a bit of a cleanse, I think.

In other news, I'm supposed to be getting a new niece or nephew next week! I hope it's before I leave town :D BABIES!
Posted by Lynne at 2:12 PM