Wow... I haven't posted in over a week, and I never even noticed until last night when I was trying to remember when I had last blogged. I guess I've been a bit busy! 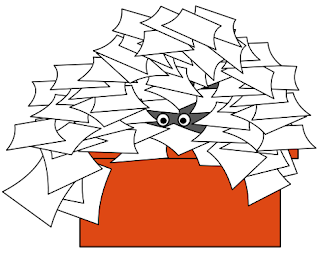 I'm now on my own at work, which means no safety net, no experienced person to run to when I don't know what to do, and no more relying on someone else. It's been.... oddly liberating! I really like and respect the lady I'm replacing, don't get me wrong. But now I feel like I can really sink my teeth into this job and figure out what I'm doing. 95% of the time I'm at work, I'm left to my own devices. It's a bit weird, because I'm used to having a bunch of people around, but I'm slowly getting used to it.

Things have been a bit crazy at home, but the kids' mattresses arrived, so they now sleep a LOT more comfortably (Zachary laid in bed for an extra half hour this morning - not because he was tired, but because he was comfortable LOL), and we've managed to keep up with the cleaning. I've got to make a bit more progress with the laundry, but one thing at a time. I made some more jam last weekend (blueberry rhubarb freezer jam) that was just delicious, and when I was at my mom's yesterday, I gave her a jar of blueberry and a jar of strawberry rhubarb, and my aunt got a jar of blueberry and the last of 2009's kiwi daiquiri jam. (I'm going to have to make some more of that, perhaps WITH the rum this time).

It's been hot. SO hot. So hot that it's too hot to knit in my apartment. Therefore, I've been dragging my knitting everywhere I go. Lunch today was half the sock flap for the first of the Riverbed socks. I'm sort of torn between finishing them and giving them to my daughter (who is 10... and her clothes tend to disappear if I don't pay attention) or frogging the whole sock and restarting with bigger needles so they'd fit me (which they were originally supposed to). All I know is that the suggested needle size absolutely doesn't work with the yarn weight it was meant to. I've done a few rounds on the full granny square blanket, and made some progress on Sadie's baby blanket (which is good, because Sadie had her baby over the weekend and he's ADORABLE!).

Skye's off camping with her birth grandmother for a week, and Zachary goes back to his dad's tonight, so I have a rare treat - I get to go to a mid-week knit night! This is very exciting because a) I miss my Tuesday night ladies, and b) I won't be at Friday's knit night because Rob and his son are coming up for the weekend! :D Oh yeah... Rob's coming up for the weekend, so I'll be sporadically available online (and off). This wasn't a planned visit, and we slapped this together on the spur of the moment, so I'm anxious to see how it turns out (this will also be the first time he's seen my place since the big cleanup). So that's what's been going on with me... anybody still here? :P
Posted by Lynne at 2:21 PM