Fitness - Not much to report. I've been doing my squats, and I'm still waiting for the treadmill to be fixed. The parts have been ordered and paid for! Hopefully They'll come before Rob gets here in two weeks.

Knitting - Oh boy... Well, first off, since I last wrote, I "finished" the Tempting top. Problem is, I don't think the designer has ever met a plus-sized person in her life, and the math just didn't work. The sweater is wayyyyy too short, the top absolutely GAPES open, and the whole thing is just a disaster. I was at Kari's when I was finishing it up, and as I was casting off, she kept saying, "That just doesn't look right..." We puzzled around with it for a while, and I think we've figured out a way to fix it, but it would require ordering five or six more skeins of yarn, at roughly $10 a pop, and I'm not sure I'm willing to commit that much more money to this stupid project. It's in the naughty pile for now.

But on to my new obsession! I saw pictures of other people's finished projects and immediately knew I had to knit this. Somewhat similar to the furor caused last year by Veera Välimäki'sColor Affection (thanks, in part, to the Yarn Harlot posting about it on her blog) and Tiny Owl Knits' Beekeeper's Quilt, this pattern is making huge waves in the Ravelry community right now. It was designed a couple of years ago, but is gaining some pretty major popularity and I personally know several people who are knitting it. I cast on this morning and I'm nearly 3/4 of the way done with the pattern as written - I have more yardage though, so I'm planning on making it slightly larger than originally intended. Can you guess what it is from this photo? More details to come soon! 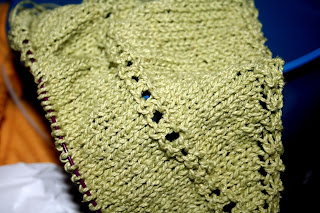 Kari invited me over this afternoon after she and Sue had recorded the podcast, but unfortunately, it was shortly before I had to pick up the kids! I was hoping she'd teach me to card so I could help with Milly (Milly would be the fleece I bought that was washed, but otherwise unprepared), but we never did get around to it. Sorry!!! That said, if anyone has a drum carder they'd like to sell or get rid of, please let me know! (because Kari has to return the one she borrowed from our friend Amanda!)

Food - I have to admit that I've been particularly lazy on this front... But I did find a pretty good deal at the grocery store tonight. I was just popping in to get something for dinner, but they had half-bushel baskets of Macintosh apples for $4, and whole spatchcocked chickens for under $5. So I grabbed two baskets of apples (looks like I'm making applesauce!) and three chickens (Matzo ball soup, anyone?). Major score!

School - Not much to report on this front either, although this Monday's Judaism class has been co-opted by a visit to the National Library and Archives to view the Lowy collection (Jacob M. Lowy collection, to be precise...). I can not WAIT.

Everything else... - Not  much to say here either. I guess the major point of this blog post was the mystery knitting project ;) I've been thinking about doing some contests and draws in the coming weeks. Leave me a note in the comments or pop me an email if this would interest you!
Posted by Lynne at 4:09 AM