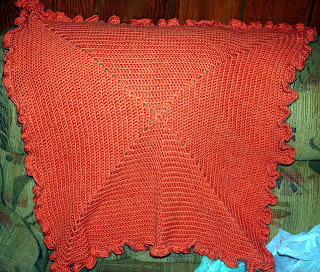 Finished object the first: This is just a basic full granny square with a ruffle around the edge. It's knit in a mill-end yarn I suspect is Bernat Softee Chunky in Pumpkin (feels like Softee Chunky, anyway). I crocheted it with a size I hook and it took me an embarrassing amount of time to do this. I got bored with it. I did, however, finish it, and it's a lot more even than the photo suggests. My couch is nowhere near that green, also, but the colour of the blanket is dead on! 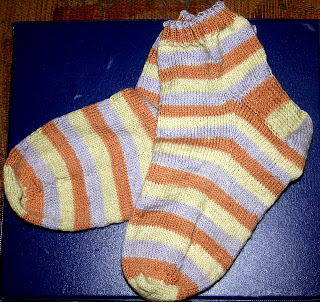 Finished object the second: STRIPEY SOCKS! The first one of these was done back in October, at which point I promptly misplaced the second ball of yarn, so I couldn't finish them. I found the second ball when Rob was helping me clean up a bit around the house. They're done in DGB Confetti Superwash in colourway 4005 (so descriptive!) on 2.5mm needles (US 1.5). Sue gave me this yarn because she wasn't in love with it anymore, and it wasn't until she started seeing it knit up that she sort of regretted it. I didn't use a pattern. I took the Yarn Harlot's "Grok the Sock" class and this was the result :) I've knit two pairs now and I think I'm working out the kinks. I do tend to like shorter socks, so that's why these are anklets and not full-length socks. 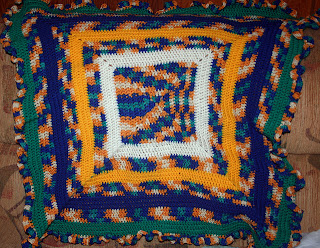 Finished object the third - a stripey baby blanket! Crocheted with the same I-hook (I only have one ergonomic hook), this one used an enormous ball of the most hideous colourway of Phentex Worsted Acrylic I've ever seen :D My friend Sylvie gave it to me when she was moving to Italy. As it turns out, there were four balls, one of each of the colours in the Phentex, in a big bag of random acrylics another woman gave me last summer. So I decided to stripe them - I was attempting to teach myself colour changes in crochet, since I'd never done any. I think the pooling in the variegated yarn is a bit weird, but other than that, it turned out a lot better than I had expected it to! And my daughter has little tiny balls of each colour left over to bring to school for crafts!

So there we go. Photos of all the finished knitting! I'm working hard on finishing Tempting, and I'm within 10 rows of the end. I didn't realize until just now when I was grumbling about pattern errors in Tempting that the last three things I finished were knit or crocheted entirely without patterns! Wups!