I meant to blog yesterday. Really I did... but I haven't been sleeping well, and it's year end at work, so things are a bit crazy, and I think all the fun and excitement of the last month or so is starting to catch up with me. I will be venturing out during lunch to obtain some ColdFX!

Fitness - I have been keeping up with my squats (did 60 last night!), and today is a rest day. I'm not sure I won't do ANY today, but there's no official tally. Tomorrow, the treadmill is getting repaired (YAY!) so tomorrow, the walking challenge gets a reboot. For those who don't know what I'm talking about, Rob and I did this walking challenge last year. I'm starting it over tomorrow! I have a couple of friends from Ravelry who want to join me, so it should be fun :) I'm trying to keep moving even though I've been increasingly lethargic the last few days. I may bring my little stepper to work just so I have something to do when I get off my butt at work every hour or so.

Knitting - well... I seem to have been struck by a case of extreme startitis. I started a new crochet project last night (12-point star baby blanket that only ended up having 11 points... still not sure what I did wrong there, but maybe Kari will help me at Knit night tomorrow!), I cast on an afghan square from the Great American Afghan book - in particular, I'm working on this one, but in red: 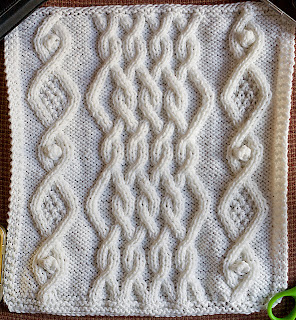 I still haven't finished my monster. He has to arrive in Ohio by January 31st... *sigh* Kari gave me the DPNs to finish him, so I have no excuse. I'm just not having fun knitting him anymore :( I did commit to this though, so I'll pick him up again tonight and try to put myself in the right frame of mind. My stripey sock is half-way through the heel-flap - got that done in class on Tuesday. Beekeeper is waiting for me to finish ONE of the many projects on the needles. I have four puffs in the stripey sock yarn, four in the scratchy orange socks of DOOM yarn, and one in the yarn I used for the Falling Leaves socks (which I still owe you guys a picture of, I know!) Not a lot of progress, but I knew going in that this was going to take years :) The second Laura's mitten is waiting until the stripey sock is done, because those are the needles I need!

Food - Not much exciting on the food front, except that the kids DEVOURED all the kitchen sink soup! Even with big ropes of kale in it, and leeks and onions and other assorted veggies, they went nuts for it, and it was he first thing they asked for when they'd get home from school at night. I think I'm going to have to keep a pot of soup on the stove on a regular basis if they like it that much. Maybe I'll do clam chowder this weekend. One exciting thing for me... I bought bento boxes last night! They're not REAL bento boxes, but they're little plastic containers that snap together and they're just the right size to have a variety of different things. Today's lunch is veggies with dip (veggies and a cheese string in the big container, dip in one of the little ones), a medium container with crackers and goldfish, and another small container with chocolate covered raisins and dried pineapple. I may have to come up with something a bit more substantial for the main part, like noodles with meat or something.

School - Well, Intro into Judaism was awesome this week. Our cantorial soloist at the temple is leading us through a bit of a seminar on chanting in prayer, and it's fascinating. The fact that she has a beautiful voice and demonstrates it regularly during the class doesn't hurt, either :) I really need to start studying my Hebrew a bit more seriously though. I'm sill just sounding out and sight-reading with the chart open. I need to make myself some flash cards so I can differentiate between the similar letters without referring to the chart! Not much left to say about the other class, since there's no homework yet, and we don't have our textbooks.

Everything else- Tonight is the first time in a while that I'm going to have a quiet evening at home. I'm hoping to catch up on the laundry, do some dishes, and maybe get the kids to work on the livingroom a bit. I'm really just hoping for a decent night's sleep without the nightmares, really. *yawn* (I originally typed that out as *yarn*... freudian slip much?)
Posted by Lynne at 11:37 AM