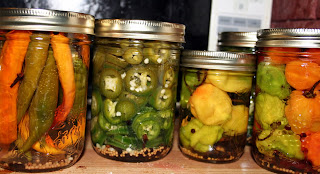 I had some time to kill between loads of laundry, so this is what I decided to do. I made some pickled jalapenos several years ago as small Christmas gifts, and my cousin LOVED them. So much so, that he's been begging me to make him some more ever since! So today, I figured I'd get my butt moving and pickle me some hot peppers. I wanted to spice things up a bit though (pardon the pun) so I also got some Jamaican finger peppers (which is what they were called at the store, but apparently that's not a valid variety name) and some small lumpy peppers which were only identified as "hot" (gee, that's helpful). 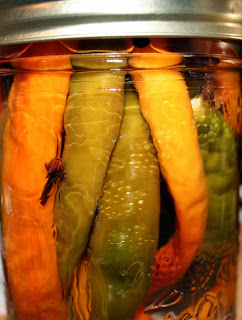 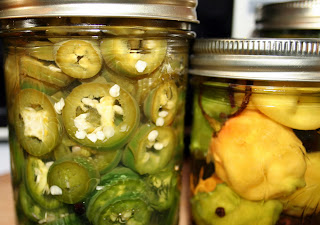 I had JUST sealed the jars when I took these pics, and you can already see the jalapenos starting to change color. I think my cousin is going to be a very happy man in a few weeks! 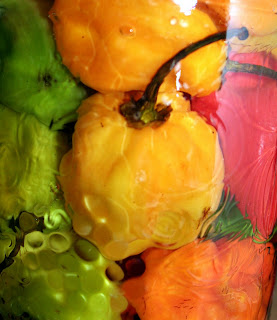 Start by slicing the jalapenos about 1/4 inch thick. If you want milder pickles, remove the seeds, but I like to leave them in (more heat that way). Prepare your jars by running them through the dishwasher. In a large saucepan, bring the water, vinegar, salt and sugar to a boil, then reduce heat to simmer. Boil some water to soften your lids, then place the lids in the hot water. Place the spices in each jar and pack in the jalapeno slices until about 1/2 inch from top. Ladle in the vinegar mixture until 1/4 inch from top. Seal jars finger tight (that means you screw the ring on over the cap JUST until it stops turning easily - don't force it). Let sit for 1-2 weeks until peppers are fully cured. Then open and enjoy! My cousin likes them on hotdogs. Keep refrigerated after opening.

3 cups water and 3 cups vinegar makes enough brine for 5 pint jars and 1 half-pint jar (I always make one small jar as a "I don't feel like letting these cure" jar to open right away). You can also use any other type of pepper to do this, but I'd wear latex or silicone gloves if you don't plan on leaving them whole!
Posted by Lynne at 4:48 PM