What my problem is...

I made a startling discovery this morning. First off, a bit of back story. I did not end up going to the gym on Monday evening. I had a midterm, the kids were not being cooperative, and I was freaking out slightly (sorry guys!). I did walk around on campus for a while, but there was no significant exercise being done. I also didn't visit the gym over the weekend, mainly because of my belief that being tired and sore is not a good idea when you have to be on your feet for 4-5 hours. I did have a session with Avril the wonder-trainer yesterday, and boy can I feel it today! (Today might be a cardio-only day... I haven't decided yet).

So yesterday, I was in the gym, and I was semi-hungry and semi-nauseous (she says it's normal that when your body starts building up lactic acid through muscle-toning exercise, you will feel a bit nauseated). It was hard work, and I was not wearing gym-appropriate clothing. I was wearing office-appropriate clothing. So resolution one: I need to buy something to wear to the gym that isn't embarrassing for me or for my fellow gym members ;) I was getting hot, and sore, and I was working really hard. And there were tears. This shamed me to no end. I cried while working out.

Now, we're not talking full-out sobbing, wailing that it was too hard and I couldn't do it (like you might see on Heavy). This was more tears slipping out the corners of my eyes and I was powerless to stop them. I kept going, and I kept crying, and I was a bit disgusted with myself. She kept telling me how well I was doing, but I kept calling myself a failure in my mind because I was crying at the gym. I kept telling myself what a weak, pathetic idiot I was for thinking that I could do this. The fact that there were a few guys lifting pretty heavy weights and grunting away next to me probably didn't help... Big hulking guys lifting weights, fat girl crying while tossing a medicine ball.

I was still pretty down about the whole thing when I talked to Rob later in the evening, and him trying to encourage me and cheer me up just brought me down further, because I was convinced he couldn't possibly understand and I was pathetic and he just wasn't seeing it. This morning, I stepped on the scale and nearly started sobbing right there (I'm actually tearing up as I type this). 282. I remember back in October, I promised myself I would never cross the 280 threshold again... I remember in November when I broke the 270 threshold (for a day) and how excited I was. How did this happen? How did I gain back 14 lbs? I have come to two startling realizations.

One: I am terrified of success. Why? I have no idea. Ever since I was about ten years old, I have seen myself as fat and disgusting. My ex-husband has informed me that before I got pregnant, I was actually pretty hot, and when I look back at pictures of myself as a teenager, I really needed help with my hair, but my body was fantastic. So what's with the fat problem? The problem is, I've never SEEN myself as anything other than fat, so a very large (no pun intended) part of me is afraid of what will happen. (or not happen... I think a small part of me is afraid no one will notice, no one will care, and I'm not sure why I care what anyone else will think, but I really do!)

Two: I need to stop getting on the scale. This morning, I actually had this thought: "I gain two pounds every time I go to the gym... why am I doing this again? What the hell's the point if I'm actually going to gain weight?" Now, the problem with this is that intellectually, I know that as I replace fat with muscle, muscle weights (a lot) more and I'm going to gain a bit before I start to lose. I've been eating reasonably well (pizza night last week notwithstanding...), I've been exercising a lot more, and my clothes fit better than they did. I feel stronger, I feel more empowered, so who cares what the bloody scale says? (I do... I SO do, but I have to stop). The whole Biggest Loser thing at work isn't helping either. Here I am, heading down every Friday morning like a lamb to the slaughter, waiting to see how badly I did this week. It needs to stop. I need to stop obsessing over the numbers, and just do what I know will ultimately work, without thinking about what the scale might say. That's REALLY hard for me. So resolution two: I will not get on the scale until Rob arrives on March 1st (I'll actually get on March 2nd, because he arrives late at night). I'm going to put the scale away, and hopefully I'll be able to stick to this. I'm also going to pull out of biggest loser at work, because it stresses me out, and I promise I won't sign up next time it rolls around. *sigh* 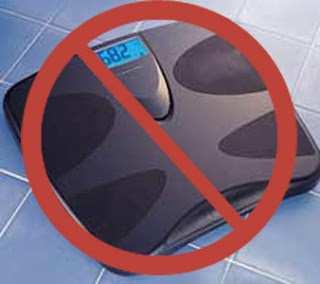 I am also very sore today, but I'm not going to take painkillers because it's pain that I earned. I worked hard for it, and I'm going to enjoy it and let it remind me of how hard I worked yesterday and that this totally IS worth it.

(for anyone who came around for knitting news today, I haven't got much... worked a bit on the one-row scarves, and I think I finally found a good joining method for the baby blanket and Rob's blanket, so I'm getting moving with those... Unfortunately, I have a couple of big projects due mid-April, one of which I wanted to have at least a draft of by the end of the month, so I'm doing a lot of school reading).