Wow... a week goes by without posting, and I don't even notice until someone asks me if I gave up the blog thing. *blush* In my defense, I have started my third job, and I'm exhausted LOL When you've been working on your butt for thirteen plus years, suddenly starting to work on your feet and doing 15 hours' worth in one weekend is a bit draining. I have started knitting a scarf for the charity knit-along and it's SO pretty :) I think once the official KAL is over, I'll just continue knitting charity stuff in between my usual projects and save the stuff for next year!

So last Friday's weigh-in was 278. Not good, but I'm still below 280. I have no excuses. I binged without even thinking about it. As in, I didn't notice I was bingeing until my stomach was uncomfortably full (which, thankfully, requires a lot less food than it used to!). This is what happens when I'm run off my feet all the time and don't plan ahead. I have no idea what I weigh right now, as I haven't stepped on the scale since Friday morning. This is unusual for me.

This is what the world outside my windows looks like right now :) 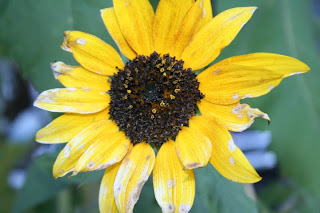 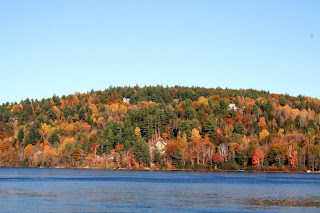 Okay, perhaps not RIGHT outside my windows, as I don't live on the banks of the Gatineau River... but near enough :) I am loving the beginnings of crisp fall weather and the apples and pumpkins in evidence everywhere... oh and the sunflowers! Sunflowers are my absolute favorite flowers :) They're so cheerful, but they also remind  you that when they die, they will bring fall with them and winter will not be far behind. They're ephemeral in that you know they will fade and pass quickly, but they don't malinger like other flowers.

It's been a week of joy and sorrow as well. My co-worker gave birth to a second baby boy last Thursday, which I am over the moon about :) However, on Monday, one co-worker's  mother passed away, and on Friday, my boss's father died fairly suddenly (he'd been ill for only a few days). I know how close both co-workers were to their parents, so my heart feels quite heavy and I haven't been quite sure what to say to either one of them other than, "I'm sorry" and "I'm here". I can only hope it conveys what I intend it to.

I've been dwelling on negative emotions for the last few weeks, and I can feel it dragging me down. It's time to focus on the positive things in my life. These include, but are not limited to:

My kids. They may drive me crazy sometimes, but I love them so much. I would never trade either of them, no matter how much easier they sometimes think my life would have been without them. Easier, perhaps, but infinitely more boring!

My jobs. Yes, all three of them ;) My day job is pretty good :) It pays peanuts, but it's challenging and fun, and my coworkers are nearly all awesome individuals. There are a couple of dorks, but where aren't there? The pizza job is okay. It pays okay, and the customers are okay. I wouldn't want to pursue a full-time career there. The weekend job is EFFING FANTASTIC. The people are good, the bosses are AWESOME, and the work is actually FUN. Yes, I'm having FUN working retail! (Hell, I work in a CRAFT STORE... that's like letting a kid loose in a candy store!) It's very grueling physically (I'm not used to running around non-stop for 7 hours), but I am definitely liking it a lot :) (I can't tell y'all where though because they have a social networking policy and I don't want to piss off the corporate powers that be!)

School. I am greatly privileged to be able to afford to go to university. I have the province of Quebec to thank for that, actually, since they send me a ridiculous cheque every three months simply for being a parent. (This is what currently pays for my course fees and books.) I'm enjoying my classes and I hope to continue enjoying them when we switch back to French in January ;) (okay, okay, maybe I took a couple of English classes for easy As).

My knitting girls :) I have such an amazing group of knitting friends. They are fantastic ladies and my life would definitely be poorer without them.

And it's now past my bedtime. At some point this week, I'll try to get some pictures of my current knitting projects up :) Go to bed!
Posted by Lynne at 10:01 PM