Friday! :D One of my favourite days of the week! Why? Because although I like my job, I like being able to do what I feel like doing all day even more. I like being able to sleep in. I like not having to get my kids up at dark o'clock in the morning, and I like not having to stop what I'm doing to go to bed because otherwise I'll be a zombie at work the next day. Call me lazy. I like being in charge of my time and what I do with it. Because during the week, let's face it, there just isn't enough of it. 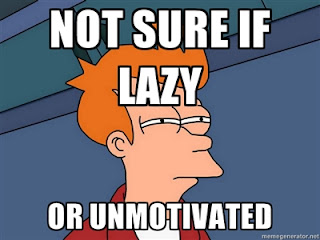 I feel horribly unmotivated though. Like lazy and slothful and hibernatory (I think I just created a new word...) and I just don't feel like moving. Which is why most of my weekends go by in a rush. Not this weekend. No way! I have too much to do, and not enough time to do it in, so some things will be sacrificed, but I will get time to spend with Kari, Sue, and some of the other people I don't get to see enough of (and maybe Sir Pugsalot too).  I will get to finish an Orange Scratchy Sock of Doom (aka Scratchy Ass Socks), which means I will have officially completed my first entire pair of socks. I will get a batch of potato leek soup made (which I didn't do on Thursday night because I was lazy).

The house has been mostly neat lately, but the bits that aren't are driving me batty. The bathroom floor is seriously grossing me out right now. The landlord had a plumber come in while I was in Chicago (don't even get me started on how pissed I was) and the guy moved my washing machine... there was a pile of black mold under there from when we had the flooding issue earlier in the year (which the landlord fixed functionally, but didn't bother doing anything about the resulting mold or rust stains all over my bathroom, and I didn't know there was mold under the washing machine or I'd have done something about it! GROSS!). Anyway, since the plumber guy moved the washing machine, now the moldy stuff that was under the machine is all over my bathroom. That, and the boy didn't bother sweeping up after he changed the cat litter this week, so there's litter bits all over the place that I'm going to need to clean up tonight. GRR.

As an aside, holy crap does the word "Desiccated" look wrong, but Merriam Webster assures me that's how it's spelled (so thanks for that, Google Dictionary, which couldn't even find an approximation!).

Ah well. So many chores, so little time, so I'd better get to some of them right now! I'm VERY much looking forward to my evening activities (which I will go into tomorrow), so I'm going to go finish up here so I can get started on them! What's everyone up to this weekend?
Posted by Lynne at 2:47 PM