An exercise in frustration...

I won't lie. The last couple of days have been extremely frustrating. I started my day off feeling fantastic yesterday. I had this dream. I don't remember the rest of it, but I was with this man. And we were in love. And just before I woke up, we walked along a beach and sat down at the edge of a crumbling concrete bleacher and laid down on the ground. I put my head on his chest, looked up at him and said, "I love you..." The man's face is not familiar to me, but he looked down at me, amused, and said, "I love you too. Are you being adorably romantic right now, or just needy?"

"I don't know," I said. He looked confused. "I just never want this to end..." I explained. And as we kissed, I awoke. In a few minutes of dreaming, I rediscovered my wonder at being in love. It felt amazing. It felt fantastic. I woke up in a great mood that followed me throughout most of the day.

I had Judaism class last night, and it was my third meeting with the Rabbi. He seemed a bit standoffish and I was very uncomfortable. I tried explaining that I had clearly had some preconceived notions before our last meeting, and I wasn't sure what he expected of me. He said he needed clarification. I answered his questions as best I could, and then he asked one I couldn't answer. "What do you expect will change if you convert to Judaism?" Well.... I can't really know, can I, never having been Jewish before. But that wasn't what he wanted to hear. And I was frustrated and tearful and afraid that I would not be allowed to convert, that I wouldn't be allowed to join the cool kids' table (I'm using a joke for effect here, I don't think that becoming Jewish will make me one of the "cool kids").

So then I had to go back to class, unable to keep the tears at bay, and try to muddle through Hebrew class while thoughts churned in my head. What do I expect will change? What am I expecting conversion to do for me? I was raised Roman Catholic. French Roman Catholic. I was an altar girl, I was in all the youth groups, I was pretty involved. And then I discovered some things about the Roman Catholic Church that I didn't agree with. We won't go into that, but I ended up leaving the Church. And I felt that a piece of me had been lost. I felt as though a piece of my identity before God was missing. I have searched long and hard for that missing piece, and I believe I have found it in Judaism. That's what I expect will change, I suppose. I will once again become a whole being before God. I was not born Jewish, but it is who I have become - it is the path I have chosen to follow - and I would like that to be acknowledged by becoming a Bat Mitzvah.

I apologize for all the religious discussion. I normally keep my beliefs pretty close to the vest, and I don't like to subject others to them (or be subjected to other people's beliefs), but this issue has caused me much consternation over the last few days and I needed to get my thoughts in order. And writing them out seemed like the best way to do that.

Today, I actually got quite a bit done at work - considerably more than I had anticipated. I left to do groceries with a small, developing headache that, by the time I had reached the grocery store, had turned into a raging migraine, complete with upset stomach and aural vision. Joy. It's gone now, but didn't do much for my mood earlier. Poor Zachary brought the spinning wheel up from the car and it fell apart on him as he walked through the back door. I panicked and yelled at him, and he got quite upset about it, winning me the Mom of the Year award *sigh* We did get it all put back together (gotta love eccentric antiques), and it works. I couldn't figure out how to tie a leader cord onto the second bobbin, and Kari actually made me a video to show how to do it, but I couldn't get the laptop to play sound, and I was getting more and more irritated... Until I took a step back, cleared my head, and looked down. And this is what I saw: 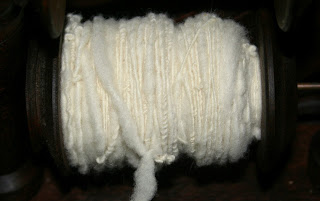 That right there is an entire bobbin of my very own handspun. It's ugly and uneven and overspun in some places and underspun in others, and it's nowhere near perfect or even usable, but it's mine. I made it and I love it :) And now I'm going to bed with a smile on my face. Hopefully Rob's sitting on a concrete bleacher by the beach waiting for me!
Posted by Lynne at 11:12 PM