Fitness - I've been keeping up with my crunches and bicep curls, but I'm still (furiously) waiting for the treadmill parts to come in. I know, I know. I keep griping about this. But for pete's sake, I've now been waiting for even a hint of information, never mind the parts I already paid for! I want to get walking again. At this rate, spring will arrive before the treadmill is repaired. Matter of fact, it's a gorgeous day out today, I think I'll take a walk at lunch :) I made myself a new little motivation poster that hangs above my computer at work, and I've made copies for the wall in front of my computer at home, my fridge door and on my bedroom door at home. Basically, every time I see a grossly overweight woman, I'm secretly terrified that it's what I look like. And the truth is, that IS what I look like. My brother took some pictures of my cousin's wife holding his new baby this summer, and I was caught in the background. I was horrified at how I looked (and at the fact that he'd caught me during the one time I ate that day LOL). So I cropped my cousin's wife out of the picture and was left with this: 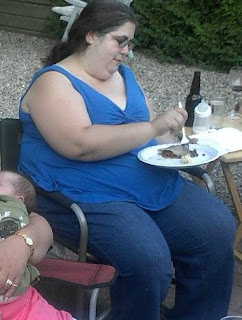 If that's not motivation to lose weight, I don't know what is. I look like a bloody great blob of fat. I know I'm better than this. I know I *deserve* better than this. And I'll be damned if I am going to continue to look like this. This? This is gross. This is not a person, it's a lazy eating machine. And I want to be a healthy, energetic person :) The kind that can go for hikes and bicycle rides with my boyfriend. The kind that can keep up with my kids :) The kind that doesn't just melt into the couch. I need to let go of the guilt I'm constantly wallowing in and allow myself to become what I want.

Knitting - There has been some small progress made on several projects. I'm about 2/3 done the Baby Surprise Jacket, I managed a few rows on Skye's sweater, and I knocked out a hexipuff and a half yesterday (the cat then tried to eat the remainder, but Zachary rescued it). I also did a couple of pattern repeats on the spiral scarf. I'm still not crazy about the yarn, but I figure this will be one of those projects I work on at odd times when I feel like knitting but don't feel like knitting ON anything I've got going. I promise a glut of knitting pictures very soon! (like maybe tonight, since I'm sure Jeff will want to have his camera for the trip to Disney he's taking the kids on).

Food - OMG. I recently discovered the wonder and ease of curries with Kari. Kari eats these all the time. I've never bothered trying at home, because I used to work near an Indian restaurant, and I'd just pick them up every so often. Well, it's been a while, and I really LOVE curries of all kinds. So the other day, Skye had some leftovers from Zachary's birthday dinner to nosh on, so I chopped up some beef stewing cubes, paneer and zucchini, and cooked it up with a bit of Tikka Masala sauce, and Zach and I ate that with tortillas. Took maybe 10 minutes to prepare, and it was amazingly good! SO EASY. So this morning, when it came time to prepare my lunch, I cooked up a few more pork stewing cubes, a bit of paneer, some wax beans and a shallot with some more tikka sauce. Delicious :) I'm now addicted to paneer, although I'm not sure that's a good thing, given that I'm supposed to give up dairy (I'm still not sure about that.) I also brought myself some fresh fruit (a small golden delicious apple and a small pear, quartered, some strawberries, and a bit of almond-based yogurt to dip it in) and a bit of ham with russian sweet mustard. I may save some of that for later in the afternoon to offset dinnertime. I've been trying to up my water consumption too, so I'm going to try to stick to a rule of drinking a glass of water before putting anything in my mouth. Kick me in the ass if we're out together and I'm not following this rule!

School - not much to report. I'm slowly plugging away at the project, but it'd be helpful if I could find the notebook I had all the handouts in! I'm meeting with the Rabbi tonight at Judaism class to reaffirm my desire to convert :) I'm so excited! That, and I'm really having a lot of fun in Hebrew class :) Hillel's an awesome instructor! I skipped the Purimspiel this weekend, but I had to get some work done at the office, and it helped a lot :)

Everything else - I spent most of this past weekend on my own. Friday night's knit night was a bit off somehow, and I didn't feel like moving on to the pub afterward. I went home, talked to Rob for a bit and went to sleep. I spent a good part of Saturday at the office, got a lot done, but I basically had NO human interaction most of the day. I went to pick up the kids, and Jeff and I took them shopping and then out to dinner at Fatboys for Zachary's birthday (he turned 14 last week). I swear, I just love this restaurant more each time I eat there! And this was two weekends in a row, since Rob and I were there with our friends Sylvie and Sarah last weekend. Can't eat out again for a while though... I'm starting to crave simple, homemade food and a lot of greens. So much so that I've started dreaming about planting gardens again. I know it's a pipe dream at least for this year, but mark my words. Someday I will have this: 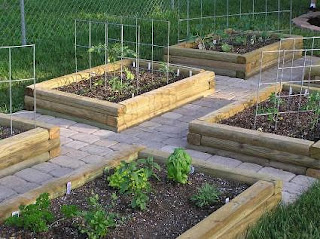