The best-laid plans of mice and men...

Okay, so by now, everybody knows that Rob's flight got cancelled on Friday, so I didn't get to spend the weekend with him as originally planned. So instead, I spent the entire weekend in seclusion. I didn't go out to knit night on Friday because the weather was horrendous, and I was so bummed that Rob wasn't coming that I didn't want to see anyone else. Saturday, I sat around all day watching episodes of Smallville, knitting, and fighting off a migraine (I lost). Sunday, I bummed around most of the morning, still fighting off the migraine (I finally won), and then we went to my mom's for the afternoon.

Because of Rob's impending visit and my inability to read a calendar, I had booked Monday off - Rob was supposed to come for Family Day weekend, since I get that Monday off. Family Day is February 18th, not February 11th, so I had to book it off. I decided not to cancel my day off because I woke up Monday morning with a sore throat, and both kids had a PD day, so we had a nice quiet day at home. I had a dr's appointment in the morning, got a referral to a counsellor who specializes in eating disorders (Yay!) and got an order for an EKG. Turns out my doctor never got the blood test results back from the lab, so I went by and picked them up. There are a few things on there that worry me slightly, but more on that after I've discussed them with my doctor. So.

Fitness - Don't talk to me. I feel like crap, physically and emotionally, and I will post about this when I'm feeling a bit more human. My doctor did confirm that I have a soft tissue injury to my left knee (she found three separate pockets of fluid after I told her it had been sore since I started doing squats. Her solution? Stop doing squats!) I'm still waiting on the treadmill people, and I think I'll phone them today because I'm getting tired of waiting.

Knitting - I was getting bored with Skye's sweater, so I cast on a few things. First, I cast on a Spiral Scarf using Staci Perry's tutorial, size 7 needles, and this god-awful Noro Maiko I bought when Knit Knackers was closing their doors. It's full of VM (vegetable matter), it feels horrible to knit with, and I just don't like it. I'm glad I gave the four skeins of forest green I'd bought to Sue! 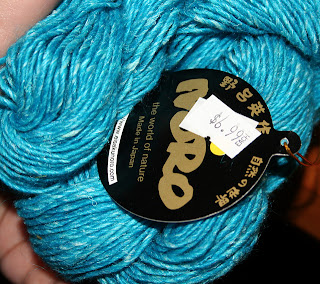 It's a gorgeous colour though, so I figured I'd turn it into something small and pretty that I can wear to dress up my favourite black outfits. I also cast on a Baby Surprise Jacket on size 5 needles using some Lang Javolll Magic I had bought to make the Riverbed socks. 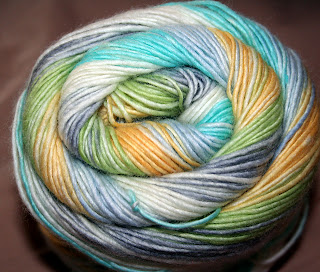 This is a gorgeous ball of sport-weight yarn that's more than enough to do a BSJ, and I've kind of fallen out of love with the sock pattern (I'll go back to it someday when I find the right yarn - this wasn't it). The BSJ is kind of a fire and forget type of pattern. I've made two or three of these so far, and I love them for almost-mindless knitting. While in class last night, I knit on the BSJ for a while and then decided to pick Skye's sweater up again - where I knitted for a few minutes and then realized I had somehow managed to knit 2-3 rows at some point that weren't marked on the row counter, because I was way off. *sigh* So now I have to tink back a few rows. Kari said I could just keep knitting and tink back where the cables should be and fix them, but that sounds too much like work, and with my brains leaking out through my nose right now, I'd rather go the easy way. I've gotten a lot of knitting done this weekend!

Food - I finally made the applesauce! I spent a few hours peeling apples, cooking the applesauce and canning it. I think I didn't let it boil down long enough though, because there's about a half-inch of liquid at the bottom of each jar LOL It set though (without pectin!!! literally all there is in this stuff is a bit of water, and apples!). We'll see how it tastes when I cook some pork chops this week. I love savory applications for applesauce. I was meant to make the asparagus pickles with the kids yesterday, but I felt so rotten that I took a nap before class - and it's a good thing I did, because I felt fantastic when I finally got there!

School - Kevin gave us all a fantastic student-led presentation on Purim yesterday - which was useful, because I had no idea what Purim was about! Hebrew class went about the same as always. The instructor keeps telling me I'm doing really well, and I'm getting a lot better at sight reading, but I'm still having trouble telling the chet, the hei and the tav apart, and the bet/vet, kav/chaf and pei/fei... and then there are the dots that change the letter sounds, and then the sofit (final) forms... and now the ayin and the tzadi... and I'm a bit lost LOL I need to make myself some flash cards to practice.

Everything else - well, I covered most of it in the first paragraph, but I was an idiot, stopped taking ColdFX when I felt a bit better, and then the cold kicked my ass. Thank goodness for Buckley tablets (AWESOME) and lots of water. This is what happens when I watch tv or movies until 2-3 in the morning because I'm depressed. Hopefully, the worst of it will be over when Rob finally arrives this coming Friday (hey, what do you know? On FAMILY DAY WEEKEND!) Shut up. Don't judge me. It's the mucous talking.