Sorry about that. I fully intended on blogging before we left for Maryland, and I flubbed it.

The girls and I left bright and early Friday morning to head for MDSW. It's a long drive. Not as long as the drive to Chicago, but pretty long, nonetheless! There was road trip food (we're becoming masters at this), there was music, there was caffeine. Our hotel was quiet, clean, and FULL of MDSW attendees - as we were checking in, we met knitters :D

Saturday morning, we had breakfast at Waffle House (okay food, way dirty restaurant though - there was a PUDDLE in the kitchen that servers and cooks kept stepping in and tracking all over the damn place - hork!) and then we headed to the fairgrounds. The Howard County fairgrounds in West Friendship, MD are located in such a picturesque neighborhood, we could hardly stand it. It took every bit of willpower we had not to pool our money and buy a nearby property that was for sale. I'm being facetious... there was no way we could afford a property there! The tiny one we saw right across from the fairground entrance was $400,000 ;)

We dropped our camp chair and yoga mat off at Hoar Base Camp and off we went to peruse the vendor booths! Fortunately, Cloverhill was one of the earlier vendors we came across, but even so, they were almost entirely out of the one-pound Three Irish Girls bundles we were looking for. I snagged one that's all gorgeous reds - four skeins of sock yarn and two mini-skeins of what looks like sport weight. SO pretty! 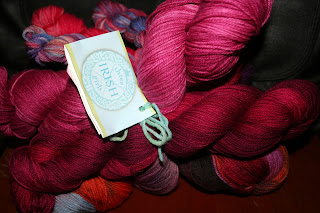 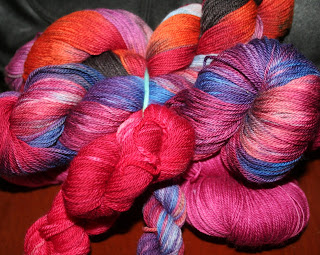 I also picked up a skein of Wild Hare Fiber Studio Pinnacle sock yarn in black, grey and hot pink :) I had put Rob's sock in the naughty corner - oh, let's face it, I frogged it again - and I needed sock yarn to start a sock, so the black and pink got elected! 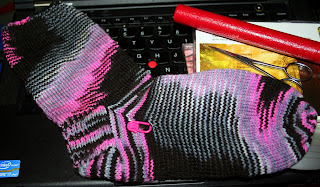 I also managed to pick up a 4-oz bump of superwash BFL from Bullen's Wullens (who don't yet have a website... o.O) that is so soft and wonderful and I'm in love with it (and it was $10!). Pics to follow once I get home tonight and upload them. 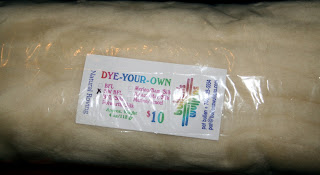 I bought the fiber because.... Drum roll please.... I have acquired a spinning wheel :D My friend Denise sort of has a bit of a hobby of buying used wheels, drum carders, etc., fixing them up and reselling them. So when she got her hands on this beauty, she offered to sell it to me, knowing that I was looking but that my budget was very limited: 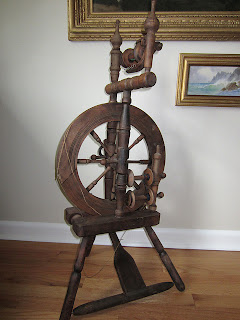 That right there is a Haldane Shetland wheel (Denise was about to give it a coat of Dutch wood oil so the band is off and it looks a bit wonky). I got it for pennies, and I pick it up to bring it home tomorrow! I am SOOOO excited!!! Now I just need to take a spinning class, since I've never spun before. Now maybe I'll be able to help the girls get on with the fleece I bought them last year! Millie is still sitting in Sue's craft room in the corner because nobody has the heart to keep working on her - Kari used the drum carder she borrowed from a friend of ours to process a bit of it, but there's SO much left. It's kind of insane.

I also picked up a bunch of little odds and ends (including some really pretty little apple-sized bumps of colored fiber, cookie cutters, and some other little unique items) as a prize care package for people who met us at the festival and had their pictures taken with Sue and Kari. If you met with us and took a picture, go over to the Two Tangled Skeins group on Ravelry and post them for your chance to win!

There was a podcasters' meetup on Saturday afternoon, and I sat there winding my skein of black & pink yarn into a ball and casting on the sock... and apparently burning to a crisp, which did not become apparent until many hours later. Kari went out after we got back to the hotel for the night to get some aloe because Sue and I had both burned ourselves silly. We missed the LSG meetup at the Diamondback Tavern in Ellicott City because we were all too wiped out to be personable. The drive home on Sunday was pretty brutal because we were all still really tired, and starting to get cranky about the lack of sleep, but we made it :)

Next up is Stitches Midwest, but that's not until the beginning of August, so there will be a lot more going on between now and then. Right now, I'm attempting to initiate a purge of my home because there's wayyyyy too much crap in there right now. I may take Kari up on her offer to help some time this week ;)
Posted by Lynne at 2:23 PM