Sorry about that... (to the two or three people who read this blog). Things got a bit crazy there for a while. My job was disappearing, things at the store were nutty (I've lost a few more coworkers I'm quite fond of, and I'm not happy about it). Things with the kids were also nutty, and there was some travel involved. Most of my free time dried up entirely.

My job ended last Tuesday (May 22nd). I was drifting in the wind again, but a mere two days later, I signed a contract for a PERMANENT JOB (I've never had one of those before... this could be neat!). I started my job this Tuesday (May 28) so all in all, I was unemployed for a week :) I can deal with that.

Arrive at work on Tuesday to be given a remote to our private, gated parking lot and to be given the 10 cent tour. We have a full kitchen (minus dishwasher, but meh...), a basement (yeahhhh.... bit creepy? But I can live with it... I don't work down there), a gorgeous conference room downstairs, and private offices upstairs. My office? My very own office? It has two windows, two filing cabinets and a DOOR, dudes! I have an actual office for the first time ever! Yesterday being my first day, they gave me alarm codes and keys and I closed up by myself. It was a bit of a shocker. I feel like a grownup!

I also work a few short blocks from the Parkdale Market. Heh... this could be dangerous (oh, and right across the street from Wabi Sabi - one of the cutest little LYS you'll ever find).

School is still out, and the protests are getting out of hand. Several nights now, the students have begun marching down St. Joseph Street in Hull (which is about 50 feet from my front door), banging on pots, using noisemakers and vuvuzelas and yelling and chanting at the top of their lungs. At 11:45pm. With police escorts. Am I happy about this? No I'm not. It's getting harder and harder to get any sleep at all before midnight, and it's pissing me off. I'm not sure when I'll be able to get back to class, but I'm hoping it's soon. I'm not willing to lose more than the semester that's already been wasted on this nonsense.

Plants are, remarkably, still alive. I haven't transplanted any of the 2nd generation of seedlings yet. All the previous ones are dead and gone. I also don't have any tomato plants, but I'm seriously thinking of giving up on the garden idea for this year. I just do NOT have the space for this, and it's annoying me to no end. The second I bring a plant indoors, Zachary's cat will either eat it, poop in it, or dig it up, and I'm fed up.

The house cleaning is going much slower than I would like. I think the major problem thus far has been the lack of a vacuum cleaner, and the over-abundance of laundry. The vacuum cleaner problem has been solved (thanks, Steve! - Rob, don't forget to give him the money if you haven't already!), so now we just need to get the laundry monsters under control. Tonight we'll be moving the big freezer ... um.... I'm not sure where. It may end up in the back room, but I'll have to see what I can manage. And then we'll be cleaning and vacuuming that area and hopefully the livingroom too. UGH.

But first, a big fat sorry about my absence for the last three weeks. I kept meaning to post, but I realized that I had nothing positive to post about (with the exception of the job) and I didn't want to just come on here to whine and rant. Tomorrow's entry will be regarding the whole weight loss thing and how that sank like a lead balloon (and why), and now that I'm employed again, there will be no reason why I can't renew the gym membership! (and I'm looking at having the treadmill cleaned. I don't know if that's a thing or not, but I want to find out!) 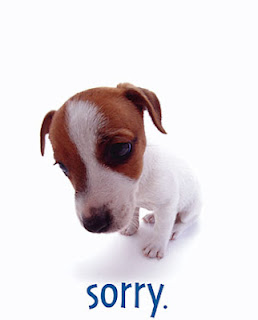