Sorry it's been so long, but I've been feeling pretty alone and unmotivated recently. Rob and I have been finding less and less time to talk, and when we do talk, it feels like we're just background noise to each other. Kind of sucks, but hopefully the trip down at the end of the month will solve that. We've both been really busy and had a lot of stress piling up. The stress of not knowing if I'm going to remain employed beyond the next two weeks is starting to wear on me as well.


I hadn't gotten on the scale in a few weeks, so I decided to get on this morning. I did NOT like the number I saw. I am not happy. I had noticed that my legs were bothering me more than usual lately (actually, pretty much the way they used to before I lost 40 lbs....) Well, it turns out that my overall loss is now only 20 lbs. This is a big problem. I haven't had the spare cash lying around to renew my gym membership since the beginning of April, so I've only been to the gym once (paying cash) in a month. Not good enough. I've got to get my documents together and get my taxes done so I'll have a bit of money for stuff like that.

Last night, I was totally motivated. Rob and I are doing the arthritis walk in just over a month. I've been trying to get moving to train for that. (I can walk 5K, but it really takes a lot out of me.) So last night, I put the kids to bed and tried to hop on the treadmill. "Tried" being the operative word. First, Skye seems to have misplaced the key (the magnetic safety thingie you hook to your clothes)... I know it was Skye, because she's the one who keeps sneaking onto the treadmill when she thinks I'm not paying attention. Now I have to see if I can get another one of those. I used a fridge magnet last night, and all was great. Then I hit "start" and nothing happened. The belt didn't even budge. ARGH. A lot of detritus passes through the back room - the cats like to sleep on the treadmill, so cat litter, hair and other stuff they drag around gets left on the belt... and the recycle bin sometimes lives on or next to it, so that leaves some stuff behind as well, and the kids tend to run the machine without sweeping off the belt first. So lord knows how much crap has accumulated under the belt. I try to lubricate it regularly, but clearly, something is off.

Fortunately, the belt has a five year warranty on it and the engine has a lifetime warranty. So I should be able to have it repaired for minimal cost, hopefully. I did take the stairs up to my office this morning (after the 3-block walk to the office). I thought I was going to have a coronary in between floors 4 and 5 (where I work), and my legs were STIFF when I got to my desk, but there we are. I made it. No more elevator until that number is a little smaller! 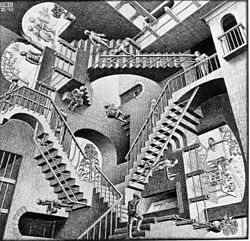 Still no real word on what's happening with school. For the last semester, our prof emailed us an open-book exam he wants us to return to him by end-of-day tomorrow, and then we have another ten days after that to complete our final projects. I think that the idea of this strike has been corrupted considerably since its inception, and now it's just become an embarrassment and an annoyance. PLEASE just let us all go back to class. This tactic isn't working, let's come up with something else.

I have one basil plant and my chives remaining from the original batch of seedlings. Everything else died :( I thought the chives were dead, but the little buggers grew back and are now about six inches long! The new seedlings are doing quite well, and by the time they're ready for transplanting (soon, I think... the cilantro already has true leaves poking out), it'll be warm enough outside to leave them there. I want to try to find an end table or bench to put them on outside. I've given up on planting rhubarb this year. I'll have to content myself with the crops at Rob's and my mom's house. Not sure if anything has broken ground in Rob's "garden"... we planted a few flowers here and there, but I'll have to check on it when I visit on Memorial Day weekend :)

The baby blanket is really starting to look like a blanket (I'm 11 rows from the turning point... then it's all decreases!) I decided to go until I hit 125 stitches, and then start decreasing. It'll be a good size stroller or car seat blanket :) The granny square lapghan may end up being a baby blanket after all... I'm not sure that 3 balls of yarn is enough to make anything bigger. It's doing well though. I attached the third ball this weekend. Did a lot of knitting while watching a couple of movies. I can't wait to finish these two though... they're kind of mindless projects, but there's been too much going on to deal with the lace curtain. I'm looking forward to a slightly more relaxed period up ahead for me to make some progress on that one. (It's half done... I just need time to do the other half!)

And that's basically what's been going on with me for the last two weeks. How's things by you?
Posted by Lynne at 10:47 AM