So Kari, Sue and I left Ottawa last Wednesday morning at stupid o'clock (which, in my world, equals 4:30am), headed toward Chicago and STITCHES MIDWEST - YEAH BABY! I learned a few things along the way, like never trust Kari to give you directions, and never think that just because you've driven a particular route 50 times, you can't still get lost :) We arrived late Wednesday evening, hit Bill's Custard Cafe for a late dinner, and then headed home to Rob's house.

Thursday morning, Rob went to work and I made the girls some Cheddar, bacon and asparagus eggs for breakfast before we headed out to the Renaissance Schaumburg Convention Center Hotel to pick up our registration packages and get ready for our classes. My first class was The Confident Knitter with Kellie Nuss - it was a bit too much of a beginner's class for me, but it was still quite interesting to follow along. Then the Marketplace opened for the attendees' preview and Kari and Sue had a great time going back and forth to all the booths on their colour-coded, prioritized map :) I had forgotten my wallet at the house, so I didn't buy anything, but I knew from experience that the market would still have plenty to buy during the rest of the weekend. We closed out the day by seeing a designing talk by Nicky Epstein (which was only open to class attendees, and it was free, so we went!) Rob came to visit for a while between the market and the talk, and we had Five Guys for dinner (wups, we skipped lunch).

Friday, Rob was at work bright and early again, so I made the girls an apple-cheddar cake for breakfast (it was supposed to be muffins, but for some reason, my muffin tins keep disappearing from Rob's house!) Ray later looked at the cake and asked why there was cheese on it, but he tried it and admitted it was pretty darn good. I makes good cake, even if it was meant to be muffins LOL I had three market session classes (1 hour as opposed to the regular 3 hour classes) so I was in and out of classrooms all afternoon, but I still managed to do some shopping at a few booths. I got three skeins of something called "Red Hot Chili Pepper" from Catherine at Knitting Notions (Nashville, TN), three GORGEOUS skeins of yarn from Lisa Souza Knitwear and Dyeworks (Placerville, CA), and four beautiful skeins of Three Irish Girls sock yarn from Windy Knitty (CHICAGO, IL!!!!!) I also got a few American Afghan books from Knitter's Magazine. I rounded out the day by grabbing the second-last large project bag in an awesome sheep pattern from Erin Lane Bags for my friend Sarah. We went home and had some lentil experiment and coleslaw for dinner (it was kind of like chili) .
Saturday was class time for all three of us. I had Entrelac Basics with Gwen Bortner, which was an AWESOME class, especially as I had taken a workshop on backwards knitting the day before :) (and an intro to entrelac workshop!) Gwen, by the way, is the author of Entree Into Entrelac, which I now need to get my hands on! I made a sad, pathetic little pop can cozy, which is meant to be felted, but I hate felting, so meh. The class was beyond awesome, and she was wearing the most gorgeous entrelac sweater! Saturday night, Rob and I introduced the girls to Chicago-style deep dish pizza (vegetarian FTW) and they loved it :) Sadly, none of us were in any shape to drive into town and have it at Due's, but it was still pretty damn sweet! Kari worked on her Insanity (I think it's the Queen Susan shawl?) while Sue, Rob and I watched the first of the Transporter movies (yum.... Jason Statham :D) OH! I totally forgot... we thought we had missed the Podcasters meetup, but it apparently never happened. The girls were really disappointed, since they were REALLY looking forward to meeting Laura from The Knit Girllls. We were rather dejectedly leaving the market after our classes when Sue stops dead in her tracks and yells, "OH MY GOD!!!! LAURA!!!!!" to a woman who was about five feet from us with a suddenly dazed expression on her face :) They chatted for a bit and we admired her shoes and so they got to meet Laura after all, and much happiness ensued!

Sunday dawned and we were all wiped out. I made French toast with chocolate cherry sauce (omg, food coma!) that I need to tweak a little bit, but it was SO good.  I was the only one who had a class that day, and I think that if they could have, the girls would have skipped going back to the convention centre (roughly an hour in each direction). We planned on going sight-seeing downtown after class, so we dragged Rob down with us, but after class was over, the girls were too tired, so we returned to the house for a nap. I tried my hand at matzo ball soup for the first time, and it turned out pretty good (although standard stock is a bit too salty for my taste) and we had bratwurst for dinner with the last of the coleslaw. Everybody had an early night packing and getting ready to leave the next morning.

Monday morning, Rob had to work, so the idea was to leave at the same time as him so he could lock the house up properly. It was still hard, but not as emotional as when we're alone saying goodbye to each other. I had had a rough night's sleep though, and an hour into the run, I had to let Kari drive for a bit. Ugh (ugh at being tired, not at Kari's driving... I was asleep! I have no idea! I'm shutting up now...) I'll cover what happened on the drive home in tomorrow's post, because that deserves a page of its own. So that's what happened on our crazy adventure in Chicago... STITCHES MIDWEST! (oh, and we're SO going back next year!) 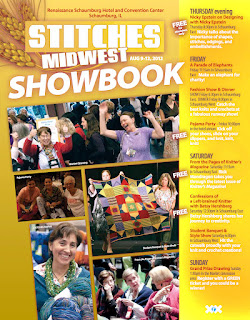